In an article about Libya for the Guardian on 29 July, eager young SWP ideologue Richard Seymour wrote that the human rights situation wasn’t as bad there as the bourgeois press claimed – certainly not as bad as in Syria or Yemen.

He had proof too – a quote from Amnesty International comparing the situation in all three countries:

‘In reality, as Amnesty put it, “there is no proof of mass killing of civilians on the scale of Syria or Yemen.”

So, what’s the problem?

Well, Amnesty never said any such thing. Seymour brazenly attributed the quote to Amnesty in order to suit his own purposes.

The Guardian had to come clean a couple of weeks later:

This footnote was added on 12 August to correct the attribution of this sentence in the article above…The Syria-Yemen assertion appeared in a piece in the Independent that cited Amnesty findings on a range of matters including estimated death tolls in Libyan cities, and went on to draw a contrast with Syria and Yemen. But while the figures were from Amnesty, the conclusion was that of the article’s author. It was mistakenly credited to Amnesty.

In a final twist the article in which Seymour’s journalistic methods are exposed is entitled, ‘Gaddafi is stronger than ever in Libya.’ 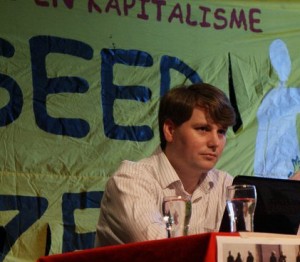