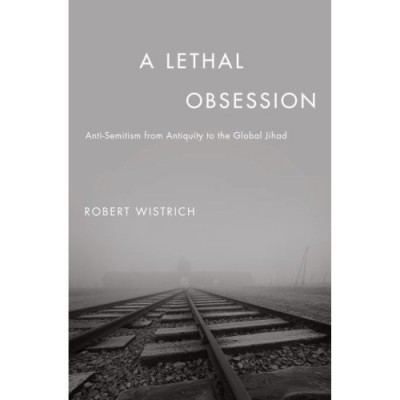 Solidarity with the Palestinians has, in effect, been globally hijacked by a culture of hatred that shamelessly and totally distorts the integrity of religious beliefs; terrorism has come to justify itself as “resistance” under the false banner of justice and human rights; the Holocaust is cynically turned against its primary victims and the “deicidal” people of yesterday are transformed into the mythical perpetrators of today’s genocide. The Jew-hatred of yesteryear has not only mutated but is actively fueling the Middle East conflict and re-exporting its poisonous fruits to Europe and beyond.

Unless it is checked in time the lethal triad of anti-Semitism, terror and jihad is capable of unleashing potentially universal conflagration. A deadly strain of genocidal anti-Semitism brings the nightmare of a nuclear Armageddon one step closer and with it the need for more resolute preventive action.

–Robert S. Wistrich, A Lethal Obsession: Anti-Semitism from Antiquity to the Global Jihad

Those who had hoped that the lethal obsession of antisemitism would end with Hitler’s Third Reich have to admit that the image of the Jew secretly pulling the strings is still a potent symbol for diffuse anxieties about the global economy. Pogroms and prejudice continued in Soviet-controlled territories and in the Arab-Muslim world, ensuring decades of distrust, malice, and violence.

Luckily for his readers, the historian Robert Wistrich does not limit his scope to the past and offers a chilling picture of contemporary antisemitism, an invaluable tool for anyone combating neo-antisemitism in its many and various manifestations. The sheer quantity of facts compiled in the 1,185 pages of this solidly documented book is overwhelming. Wistrich is scrupulously fair and generous, but outspoken where others dither cautiously.

Today not only the extreme right blames Israel for all global ills. Jihadi terrorists and a big part of the radical Left aggressively join the chorus.

While criticism of Israel is not necessarily antisemitic in itself, antisemites tend to hate the existence of a Jewish and democratic state. Wistrich documents superbly how code words like “anti-Zionism” mask vicious old stereotypes.

As Canadian MP Irwin Cotler, former justice minister and attorney general, said, this book is “a must for scholars of hate and antisemitism”. Anybody who’s interested in furthering the good of society, rational criticism and universal humanism can profit from this fascinating study which captures the wide range of a persistent obsession in an absolutely convincing and compelling way.

(Robert S. Wistrich is professor of modern European history at the Hebrew University of Jerusalem, where he is head of the Vidal Sassoon International Centre for the Study of Anti-Semitism.)