The papers are awash with speculation surrounding the logistics of the various events of March 12, 2003.

With her husband, the Liberal Democrat MEP Chris Huhne, at the European Parliament for the day and not flying back until late, she addressed a conference at the LSE’s Old Building before attending the dinner with 10 of her peers.

The two to three hours around the time that Miss Pryce’s dinner finished and her husband arrived back from Strasbourg seem crucial.

According to Miss Pryce, while she attended the conference in London her husband was caught by a speed camera in Essex. She says that when he received the penalty notice he falsely claimed she was driving the vehicle.

Sources close to Mr Huhne have insisted that Miss Pryce was driving the car at the time. Her presence at the dinner could suggest otherwise.

Miss Pryce arrived at LSE shortly before 6.30pm to address a conference on whether “the New Economy is a fraud perpetrated by a slick public-relations machine”. She formed part of a three-person panel. Stephen King, the chief economist at HSBC and a fellow panellist, said: “I remember her being there.”

The event finished at 8pm, but The Daily Telegraph has learnt that, according to LSE records, Miss Pryce then attended a dinner in the director’s Portrait Gallery in the university.

A source at the university confirmed Miss Pryce’s attendance. “We always have dinners after these types of events. The panellists, the chair and selected alumni would be invited to attend so Vicky, as a panellist, would have been there. Typically, the dinner is for about 10-12 people. It starts at about 8.30pm and usually wraps up at about 10pm,” he said.

As Miss Pryce was dining, her husband is thought to have been boarding Ryanair flight RYR7775 from Strasbourg to Stansted airport. It followed a busy day in the European Parliament, during which Mr Huhne had voted on cross-border pension funds, biofuels and fishing funds.

Despite his position in Brussels, Mr Huhne was spending as much time in Britain as possible as he attempted to become an MP. According to EU records, he did not clock in the next day, and former aides say he often left sittings on a Wednesday evening to catch a flight to Stansted before driving home.

The flight landed at 10.23pm. Assuming she did not leave her meal early, Miss Pryce would have had less than half an hour to meet her husband, a trip of more than an hour by car.

Huhne has been bullish in his own defence. Cameron has given him his “full confidence”. 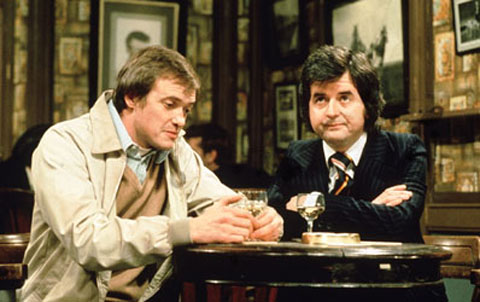 What a soap opera. This is precisely why it is best not to have affairs.

Jim M in the comments points to this episode of the Likely Lads:

Bob is pulled over by the police and breathalysed after a meal with Thelma. He protests his innocence but the only one around to hear his protests is Terry, who’s in the cells for violent behaviour at a football match. Bob can’t afford to lose his licence so Terry comes up with a plan …