(Reuters) – A stash of pornography was found in the hideout of Osama bin Laden by the U.S. commandos who killed him, current and former U.S. officials said on Friday.

The pornography recovered in bin Laden’s compound in Abbottabad,Pakistan, consists of modern, electronically recorded video and is fairly extensive, according to the officials, who discussed the discovery with Reuters on condition of anonymity.

Reports from Abbottabad have said that bin Laden’s compound was cut off from the Internet or other hard-wired communications networks. It is unclear how compound residents would have acquired the pornography.

In my experience, usually you find it under bushes in golf links.

Here you go. Some Chicks with Sticks: 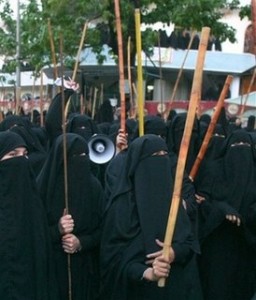 In 2007, Russian hackers took a look round one of al-Muhajiroun’s online hangouts and traced the browsing habits of some its al-Qa’eda supporting members:

[I]t’s Islambase’s Hamza who shows himself to be the least likely pure Islamist. He is the most regular poster on Islambase and when he’s not glorifying terror or insulting Jews, Hindus, Kafir and everyone else on the face of the planet, he’s posting Global News stories, designed not to pierce the Islambase bubble – nice stories about how well Al Qaeda is actually doing (really…promise!) and how corrupt the West is (his favourite posts are about paedophiles and men having sex with bicycles).

Hamza requires a psychiatrist but none advertise themselves on Islambase. Luton-based Hamza uses a network computer and a private one – he’s caught on both. What he gets up to on the private one is most fascinating:

Not my cup of tea – but then I’m not a perverse fake jihadi Islamist living in Luton off fraudulent benefits and sleeping – oh so – alone at night.

Hamza last week put a post on Islambase asking if anyone had any free anti virus software they could give him. No wonder – visiting all those sites! His computer must be riddled.