How low can the self-styled Palestine Solidarity Campaign (PSC) go? This low: 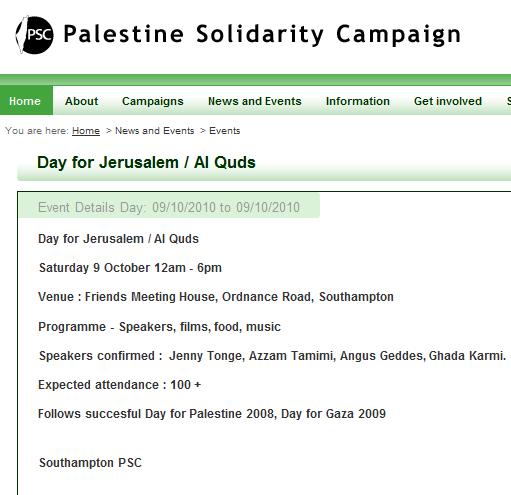 Azzam Tamimi is perhaps best known for his boast in an interview with the BBC in 2004 that he would carry out a suicide bombing himself. That’s where the “Kaboom” sobriquet comes from.

This rant at one of the “Quds Day” Israel hatred marches in London is also well-known. If you have not seen it, do watch it to get a proper measure of the odious man.

… anybody in the world, with faith or without faith, must come together in order to eradicate this cancer [Israel] from the body of humanity. We are ever grateful to the late Imam Khomenei for starting this occasion.
…
Those who resist, those who fight, those who put up jihad against racism, against Zionism are the true representatives of the Palestinians and all the Muslims regarding the Palestinian issue.
…
It is just a matter of time. You count my words and you remember these words. It’s a matter of time, as they withdrew from south Lebanon because of the great jihad of Hezbollah. And as they withdrew from Gaza because of the great jihad of Hamas and Islamic Jihad. This black chapter in the history of humanity will eventually come to an end and we say, we say we are willing to bring it to an end peacefully. But if they don’t want peace, we have another language, we have another language, and we have every right to use that language and time will tell and history will tell. Allahu akbar!

Israel is not the only target for his hatred. Any infidels will do, provided there are Muslims on the other side. Even the Taliban are hailed. At a meeting in Dublin last year, he said this:

Later, Mr Tamimi drew applause when he praised insurgents in Iraq and the Taliban in Afghanistan. He said he disagreed with the Taliban’s views on certain matters, but added: “With regard to their attitudes to liberation I say ‘Long live the Taliban’.”

The PSC counts one current Labour MP among its patrons – Jeremy Corbyn. I hope he’s proud of lending legitimacy to a bunch of Hamas supporters who cheer on some of the worst Islamist extremists in Britain.

Note that the meeting will be held in a Quaker meeting house. This is no first for the Southampton Friends. Last year they hosted a Viva Palestina fundraiser. In other words, a collection for Hamas.

Anyone concerned about vicious extremism in the UK should see the PSC and a number of Quaker meeting houses too for what they are: very much part of the problem.