A new report (pdf) from the Investigative Project on Terrorism focuses on the US side of Viva Palestina, George Galloway’s Hamas support operation.

He knows how to pick them on the other side of the pond too. Here are some excerpts from the report.

Let the message of shahid [martyr] Ahmed Yassin revive.” [Yassin is the founder of the Islamic Resistance Movement, or Hamas.]

“Fists in the air if you are a believer. Viva Viva Palestina.”

At a New York meeting, Lamis Deek of the Al Awda Palestine Right of Return Coalition spoke up for the annihilation of Israel by Hamas:

The first and foremost among them with this convoy, without question supports is the rights of Palestinians to self-determination, the right the government to choose, not only the government under which they want to live, but in choosing Hamas, what they chose was one united Palestinian state on all of the 1948 territories from the north to the very south. That is what Palestinians chose. And in supporting Palestinian choice we are saying we support their right to liberation from violent colonialism.

New York councilman Charles Barron, a former Black Panther, offered his view on the US Navy’s rescue of an American merchant captain seized by Somali pirates:

And how dare you, Barack Obama, how dare you go to Africa, kill three Somalians for trying to protect their water when an American boat went into Somalian waters.

For his part, Father Luis Barrios told the convoy travellers to:

At another New York meeting, up crops Norman Finkelstein:

Author and activist Norman Finkelstein, another speaker at the roundtable, claimed that the only weapons Palestinians have are “firecrackers and roman candles.” He added, “In my opinion, time doesn’t allow me, he would have, there is grounds in Gandhi for supporting the rocket attacks on Israel, which preceded the attack.

At a third New York meeting, Archbishop Atallah Hanna of the Greek Orthodox Patriarchate of Jerusalem made his own call for Israel’s annihilation. From the interpreter’s summary:

We have to be patient. We are in no rush in any way to get to any solutions. We’re here to wait. We can wait another 50 years. We can wait another 100 years, as long as we find a just solution, which is a one-state solution, the right state for all its citizen, every person living there – Jews, Christians, Muslims, and see the end of the Zionist regime that racially discriminates and occupies Palestine now.

After the convoy arrived in Gaza, one activist chose a line not to cross:

Noting that the Palestinian National Authority in the Gaza Strip is Hamas, and supporting Hamas is illegal for Americans because the U.S. Government considers Hamas a terrorist organization, I took care to distance myself from tour events that were not humanitarian in nature. I sat in the bus during meetings with Prime Minister Ismail Haniyeh, at the bombed Parliament building, and at the Ministry of Detainees (the later with relatives of Hamas men who are prisoners in Israel).

Others had no such concerns and went to pay their respects to Hamas. Luckily, one of their number was on the lookout for devious Jews, as activist Hector Carreon of La Voz de Aztlan has reported:

The next stop on the tour was a reception with the Prime Minister of Gaza Ismail Haniyeh at an extremely secured location. The convoy to the location was led by an escort of armed guards and police on motorcycles with sirens blaring. On the tour bus to the reception was one suspicious loud-mouth and ill mannered American Jew making obnoxious remarks about the Prime Minister. One statement he made in the presence of other delegates was, ‘Ismail Haniyeh must be feeling safe since he will have a group of Americans as human shields.’ This s [sic] one remark made one Palestinian-American uneasy and he made sure that the delegate of Jewish descent was not carrying a GPS device or anything else that would harm the Prime Minister. The incident makes clear the need for the careful screening of delegates in future aid missions to Gaza. 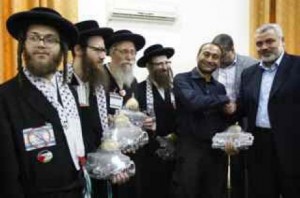 Turning back to this side of the pond, where it is illegal to fund Hamas, on October 24 a “Palestine Solidarity Campaign” meeting in Southampton will feature an “Appeal for costs of the Day and Gaza Convoy”.

Speakers will include MPs Martin Linton and Sandra Gidley, John Spottiswoode of the Green party, and Brian Dooley, a man from an organisation that takes such great care of its reputation – Amnesty International.

The host of the meeting will be Friends House Southampton. I guess helping people to raise funds for Hamas is an important part of peace work these days.