Here is Mohamed Ali Harrath, CEO of the Islam Channel, quoted on Daud Abdullah’s Middle East Monitor. He thinks he has secured a great victory:

We work with great professionalism, and we have managed to break the Zionist lobby’s monopoly over the media in Britain

This is a ludicrous statement when you can find Hamas officials published in the Guardian and other British media are hardly shy about harshly criticising Israel. It is also old school “Jews control the media” antisemitism.

It’s part of a pattern with Mr Harrath. As reported here before, he also says Jews control America.

This year’s GPU speaker line-up is shaping up. Let’s take a look at just one of them: Shady Alsuleiman of the Lakemba mosque in Sydney, Australia.

He supports the stoning to death of adulterers under an Islamic state, as you will see in this video (34 minutes in). He also believes that AIDS is a divine punishment for promiscuity and homosexuality (29 minutes in).

Remember that if there is an Islamic state the punishment of zina (sex outside marriage), the punishment of those who commit zina, if they have never been married before, they will be lashed 100 lashes. If they are married while they committed zina, or previously been married and divorced, and they committed zina, then their punishment is stoning to death.
…
Also homosexuality that’s spreading all these diseases. Let’s not deny the fact. Don’t call it the name of freedom. Don’t talk about freedom and, you know, this is the freedom of action and we could do whatever we want. It doesn’t mean that freedom of action you destroy a nation. These are evil actions that bring evil outcomes to our society.

Here is a blistering rant for some other supporters of an Islamic state – Hamas – and against the “enemies of Islam”, delivered during the Gaza war. A sample of how Alsuleiman sees the cosmic conflict with the IDF, which should be “destroyed”:

The duaa (prayer) that you sincerely ask Allah to save your Muslim brothers and sisters all around the world, especially in Gaza right now and for Allah to give them victory over their enemies, and for Allah to destroy the enemies of Islam. This is the minimum contribution that you should be contributing right now.

Hamas is not at fault, you see:

Of most concern, though, is Alsuleiman’s promotion of al Qaeda preacher and recruiter Anwar al Awlaki at an event at the Lakemba mosque in February 2009, when Awlaki’s allegiance to the al Qaeda cause was as plain as day for all to see.

AN AL-QAEDA recruiter, described as the No. 1 terrorist threat to America, was engaged by a Sydney youth group to address hundreds of young people – a decision that has caused deep divisions at one of Australia’s largest mosques.
…
The Herald attended the sermon at the Lakemba mosque in February last year but was ejected by organisers. Yesterday, no one involved with the mosque would take responsibility for securing Mr Awlaki as a speaker.

According to a director of the mosque, Ziad Ghamraoui, Shady Alsuleiman was in charge of organising evening youth events at the time of the sermon. Sheikh Shady refused to comment. He would not say whether Mr Awlaki was paid and would not comment on the subject of his speech.

I wonder why he has been coy with the media. You can still see an ad for the event on one of Suleiman’s websites. There’s nothing hidden there. 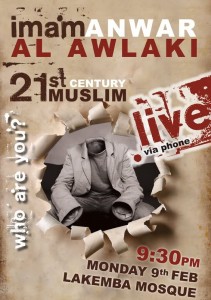 Amusingly for fans of dark humour, the City of London Police are supporters of the conference:

We shall see if British ministers and senior politicians (beyond Lord Ahmed, who is already on board) attend an event where an Awlaki promoter is welcome.

Or perhaps some of those ministers will decide that Mr Suleiman should not be allowed into this country at all.