Terry Glavin has some thoughts on the startling cover photo of the latest Time magazine. 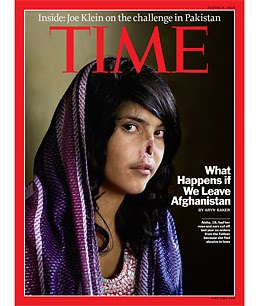 The accompanying article– “What Happens if We Leave Afghanistan”– is not online, but Terry writes that subject of the photo, Aisha, “is an 18-year-old Afghan woman whose nose and ears were cut off by a Taliban butcher for the ‘crime’ of running away from the beatings she routinely suffered at the hands of her husband’s family.”

Lost in all the self-serving and cowardly Code Pinkish yesbuttery and the handwringing about the propriety of a major magazine running a photograph so shocking – can we not at least stop for a moment to notice that Aisha, in the full flower of womanhood, is unspeakably beautiful in spite of her disfigurement? – is the fact that she wants the world to see her face. By her own account, she wants the world to see what the Taliban’s resurgence means to Afghan women, and to see the obvious implications of the “negotiated” solution to the Afghan struggle that is so de rigueur in bourgeois-left circles in the rich countries of the world.

Terry also has some things to say about WikiLeaks and its “archgeek” Julian Assange.

But please don’t tell me that a withdrawal from Afghanistan which leaves a resurgent Taliban won’t have a dreadful effect on Aisha and millions of other Afghan girls and women.