Writing in The Guardian today John McDonnell indicated that he might stand aside in the Labour leadership race to in order to ensure that fellow left winger Diane Abbott gets on to the ballot paper.

He was writing in response to a Jackie Ashtley piece (“Must women leaders all be childless fortysomethings?”) earlier this week where she called on McDonnell to do the decent thing and stand aside to ensure a woman made it through (she also lamented the lack of former female cabinet ministers entering the fray).

“Let me make it clear: I think the party is big enough to let us both on to the ballot paper and that is what I am asking Labour MPs to do; but if at the end of this fortnight my standing down would mean securing any woman on this ballot paper, or any black person, of course I will do so. Throughout my political life, principles have always come before career,” McDonnell said.

It is an admirably and praise worthy sacrifice. He knows he isn’t going to win, but that isn’t the point. Kudos to McDonnell. Of course, it is a shame that more women haven’t come forward in this race, but I’m like a lot of people in the thread earlier this week am really happy to see that Oona King step up as a candidate to challenge Ken Livingstone. I hope she wins.

But when it comes to McDonnell he should not have to stand down to make way for anyone. I don’t support him (nor Abbott) and want David Miliband win the Labour leadership race as I think he is the best person for the job.

However, all the candidates who want to stand should be able to. This election is not only about selecting someone for the top job in the Labour Party and beginning the process of rebuilding the party it is about how Labour conducts itself from this point forward. It has to be different. 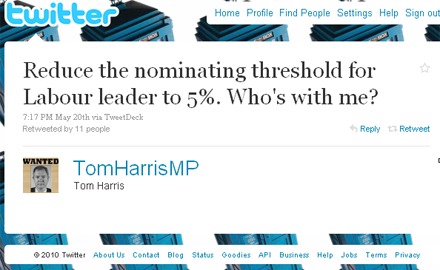 So I think it is hugely important that the idea put forward by Tom Harris, the MP for Glasgow South, recently that the leadership nominating threshold for Labour leader be reduced to 5% gets widespread support.

This idea was expanded upon by Duncan Hall on Labourlist earlier this week and he is circulating a letter appealing to the NEC and General Secretary. There is growing support (Sunny Hundal has blogged the full list of names) David Miliband has tweeted support (“more the merrier”), Ed Miliband and Ed Balls have both said they want to see a broad choice. That’s what we all want.