Mohammed Ali Harrath, the CEO of the Islam Channel, was on Hardtalk last night defending his network from the allegations made against it by Quilliam in their latest report, ‘Reprogramming British Muslims: A Study of the Islam Channel’.  It really is a remarkable interview, in which Harrath dodges questions regarding his Interpol Red notice and his work with the Muslim Contact Unit.

Despite his contentious remarks as to whether Muslims should inform the police if they suspect suspicious activity within their communities [“…we are not going to be turned into spies, spying on our children and spying on our neighbours”], or his views on why young Muslims are being radicalised [“…they are being radicalised by the foreign policy of Bush and Blair”], Mo Ali also makes a number of claims regarding the content on his channel that are clearly dubious when compared with the solid visual and photographic evidence that is included in Quilliam’s report.  Let’s take a look at a number of Harrath’s claims and break them down:

Claim Number One – 5min 14 seconds – Regarding a presenter who stated that Muslim women were not allowed to leave their house without the permission of their husbands:

Mo Ali – “…well I don’t know whether that has been said or not, because I don’t watch the channel 24 hours myself.  Secondly, that could be taken out of context because you can pick up bits and pieces, even from the Qur’an itself and interpret it the way you like and you come with outcomes…”

Ahhh, the age old ‘out of context’ excuse.  Well let us see if Quilliam did take this particular quote ‘out of context’ and whether it was actually said or not, since they actually provide a web-link to a video of this quote, and all the other quotes included in the report.  Through clicking on the link here, we can see that the presenter explicitly states that ‘without the permission of a husband, a woman cannot travel’.  No ambiguity.  No nuance.  He even states that this also applies to a woman leaving the house for religious reasons, such as going to Hajj.  The fact that he argues this point for nearly a minute shows that ‘out of context’ is not a valid excuse in this instant.

Claim Number Two – 6mins 4 seconds – Regarding a presenter who argued that women were only allowed to work in segregated work environments and that women who wore perfume were ‘prostitutes’:

Mo Ali – “…Look I don’t think this has ever been said.  It is ridiculous to suggest that…they [those quotes] are unacceptable…

Stephen Sackur…. “..So if you found out that it was indeed true and that these things have been said on your channel the people who said them would be barred…?

Mo Ali – “….yeah of course, of course they would…again those are things that are being taken out of context…”

I am slightly confused here, Mr Harrath.  First you say that these statements were never made, and then you state that they are being taken out of context.  Which one is it?  Let me help you. These things were said, and you can see them here and here in their full entirety.  It is commendable, however, for you to state that if these things were said you will ban the presenter who said them.  So I expect Sh. Abdul Majid Ali will not be allowed to host programmes on the Islam Channel in the future, right?  His regular slot is Saturday evenings, so let us see if that happens tomorrow night.  Somehow, I doubt it.

Claim Number 3 – 9min 36secs – On why the Islam Channel has presenters who are members of Hizb ut-Tahrir, the extreme Islamist organisation:

Stephen Sackur – “…Is it or is it not true that some of your presenters have affiliations to Hizb ut-Tahrir?”

Really?  None?  Let us take a look at this.  Every Sunday, the Islam Channel broadcasts a topical programme for women called ‘Muslimah Dilemma’, hosted by Ibtihal Ismail, and regularly features other Hizb ut-Tahrir members such as their Media representative, Nazreen Nawaz, and Sultana Pervin, who is referred to as a member of HT on their website.  It is therefore clear that Harrath is either clearly lying to BBC viewers, in the belief that they will take his answers as the gospel truth, or he is dangerously negligent regarding the political affiliations of the presenters and guests on his network.  My guess is the former, as Harrath later attempts to justify having HT members on the programme by arguing that ‘it is not criminal in this country to be a member of Hizb ut –Tahrir’.  Well, he is right on that one.  It is not criminal in this country to be a member of HT, although the Conservative Party would like to get this changed.    It is, however, extremely dangerous and unacceptable for a supposedly ‘moderate’ Islamic network to allow affiliates of a homophobic, anti-Semitic Islamist organisation to host and produce programmes on its airwaves.  Through claiming that the Islam Channel allows HT on to their networks due to their ‘tolerance and freedom of expression’, as Harrath attempts to claim, is frankly a joke.

Mo Ali – “….I think Hizb ut-Tahrir; they provide their role to get people away from violence, that’s for sure. I can tell you with my own experience…”

The exact nature of Hizb ut-Tahrir and their link to violence is an issue that has been proved on a number of occasions, not least by former members of the organisation itself.  That the organisation calls for a military coup in order to establish an Islamist state, even if this leads to ‘the killing of millions of Muslims’, is evidence itself of the nature of the organisation and it providing a conveyor belt to terrorism.

This is another example of Harrath dismissing the evidence that is provided by Quilliam without taking any care to actually review the evidence he is dismissing.  According to the report, HT members have used the Muslimah Dilemma programme to propagate HT ideology, which can be seen here, here and here, where the HT members talk of the need for an ‘Islamic system’ and the ‘Khilafah’ to cure the ills of the Muslim world and of the ‘lethal…cocktail of Capitalism and Liberalism’.  For those who are in the know, including Harrath, this is obviously classical HT rhetoric.  The fact that the Islam Channel allows these individuals to espouse these ideas without revealing their political affiliations is again a sad indictment of the negligence of the Islam Channel and their dismissive attitude towards tackling extremism.

This, once again, is a dubious claim.  As previously shown on Harry’s Place, links to lectures by Awlaki were available on the Islam Channel website.  One is even called ‘Brutality against Muslims’ which, amongst other things, calls on Muslims to never work with the police.  A screenshot of these clips can be seen below: 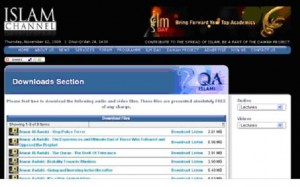 These clips were not only available on the Islam Channel website, but they were also available to download free of charge.  It was only after the Observer exposed this last November that these talks were subsequently taken down.

Mo Ali – “…This is, by the way, very long ago.  It was not now, when Anwar Awlaki was known…That time, when we advertised, nobody knows Anwar Awlaki.  That time, nobody knows what he is saying now.  So this was something [that happened a] very long time ago.  And we never, ever had his material on our TV.”

In this instance, Harrath uses the same excuse a number of other Islamists have used in defending their promotion and support for Awlaki, by claiming that they were unaware of Awlaki’s real views up until now.  Harrath even makes the claim that the Islam Channel’s promotion of Awlaki material was a ‘very long time ago’.  Well I don’t know about you, Harrath, but November ’09, when it was last noticed that your channel ran this advert of Awlaki, does not seem like a ‘very long time ago’ to me.  Particularly when Awlaki put his infamous declaration ’44 Ways to Support the Jihad’ on his blog in January ’09, in which he states that physical Jihad is obligatory on all Muslims due to the ‘rule of the law of Allah being absent in this world’.   This is, yet again, another example of Harrath attempting to deceive BBC viewers in the false hope that they do not read Quilliam’s report and see the evidence for themselves.

“…you are picking very small examples.  Take my six years of broadcasting, and assess it in a fair way.  When people go to university, and they get 80% right, they get distinction.  That means they got 20% wrong.  I will never claim that I am doing everything in a perfect manner…”

What Harrath is attempting to say here is that the examples provided in the Quilliam report are only a small reflection of the content on the Islam Channel.  I will let you decide that for yourself, by reading the report here.  It makes for very grim viewing.  Along with the contentious material documented above, the channel also espoused negative views regarding Sufi and Shi’ah Muslims, Jews and Israel.  This advert, for me, was the tip of the iceberg.

The Islam Channel has a lot to answer for.  Next time, they probably shouldn’t get Mohammed Ali Harrath to do the answering.