Last week he attended a meeting of the Palestinian Return Centre (PRC) and the self-styled Labour Friends of Palestine and the Middle East at Westminster.

The PRC are the Hamas supporters who invited Hungarian neo-fascist Krisztina Morvai to one of their London meetings last year. Sameh Habeeb, the hate publisher who runs the Palestine Telegraph, was one of the organisers of that meeting and this Westminster event too.

The Labour group lists the Palestine Telegraph under a “The best coverage of Palestine and the Middle East” heading on its website. Habeeb’s blog is also “recommended”.

In what appeared to be a sneaky move as criticism of the meeting grew, the Labour Friends removed Jenny Tonge from the list of speakers before the meeting. They also dropped Habeeb’s name from the organiser contacts. The PRC is nowhere near so shy. Here is Tonge, pictured on their website, next to Marshall-Andrews at the meeting. 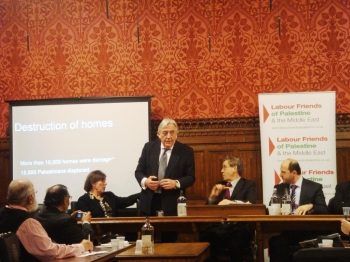 This background helps to explain a putrid piece by Marshall-Andrews about a visit to Gaza that has appeared on Labourlist.

It dives deep into the mire almost straight away:

Construction materials cannot cross the Israeli blockade. Bags of cement are slit open by grinning ringletted guards. Having destroyed they maintain the destruction.

Did Mr Marshall-Andrews actually see those nasty swarthy types at it? He doesn’t say.

On to allegations of cold-blooded murder, which just must be true:

The quiet testimony of children telling of their families being removed from their homes and shot in cold blood by Israeli soldiers. None of us doubted the veracity of what was said.

Some admiration for the wonderful people of Hamas:

We spoke to the elected leaders of the Hamas Government. If these are terrorists they are the best educated terrorists in the world. Middle-aged, clever men and women who welcomed us into the wreckage of their Palestinian parliament.

“Oh, but not the rockets!” – they are only fired by “factions” anyway – weasel words from a Hamas helper and the sneering, facile and misleading invocation of Northern Ireland come next:

Of course there are terrorist factions in Hamas. Of course rocket attacks on Israel are indefensible and we said so, repeatedly. But equally indefensible were IRA bombings of London and Birmingham which killed far more people. Had we responded by laying waste large areas of Belfast and Derry, slaughtering hundreds of civilians and systematically starving the rest we would have anticipated and received international condemnation and certain trial.

Of course they still retain an unsustainable and futile charter calling for the end of the Israeli state. It is a position they will undoubtedly relinquish, but overtures to negotiation with Israel or America are met with the silence of stone.

“Undoubtedly relinquish”? It’s been over 20 years. And it calls for rather more than “the end of the Israeli state”:

With their money they stirred revolutions in various parts of the world with the purpose of achieving their interests and reaping the fruit therein. They were behind the French Revolution, the Communist revolution and most of the revolutions we heard and hear about, here and there. With their money they formed secret societies, such as Freemasons, Rotary Clubs, the Lions and others in different parts of the world for the purpose of sabotaging societies and achieving Zionist interests. With their money they were able to control imperialistic countries and instigate them to colonize many countries in order to enable them to exploit their resources and spread corruption there.

You may speak as much as you want about regional and world wars. They were behind World War I, when they were able to destroy the Islamic Caliphate, making financial gains and controlling resources. They obtained the Balfour Declaration, formed the League of Nations through which they could rule the world. They were behind World War II, through which they made huge financial gains by trading in armaments, and paved the way for the establishment of their state. It was they who instigated the replacement of the League of Nations with the United Nations and the Security Council to enable them to rule the world through them. There is no war going on anywhere, without having their finger in it.
…
Moreover, if the links have been distant from each other and if obstacles, placed by those who are the lackeys of Zionism in the way of the fighters obstructed the continuation of the struggle, the Islamic Resistance Movement aspires to the realisation of Allah’s promise, no matter how long that should take. The Prophet, Allah bless him and grant him salvation, has said:

“The Day of Judgement will not come about until Moslems fight the Jews (killing the Jews), when the Jew will hide behind stones and trees. The stones and trees will say O Moslems, O Abdulla, there is a Jew behind me, come and kill him. Only the Gharkad tree, (evidently a certain kind of tree) would not do that because it is one of the trees of the Jews.” (related by al-Bukhari and Moslem).

Oh, but they are “middle-aged, clever men and women”, and this stinking Jew hatred, echoed to this day in Hamas media, just doesn’t matter, because Mr Marshall-Andrews says so.

I mean, who would give any credence to Hamas leader Mahmoud al Zahar?

After voting in the Gaza Strip, Hamas leader Mahmoud al-Zahar said the group “will not change a single word in its covenant” calling for the destruction of Israel. He said Hamas would continue its path of “resistance” against Israeli occupation in the West Bank even as it serves in the Palestinian parliament.

Israel, on the other hand, is a “pariah state” committing genocide, worse than the mass murderers of the Congo and the dictatorships of Sudan and Burma:

The actions of Israel towards Gaza are indefensible at any level. This is now a pariah state. This ruthless, genocidal repression is the worst in today’s world. It is worse than the Sudan, worse than the Congo, worse than Burma – a large claim but true, and that truth lies not in the identity and suffering of the victims but in the identity and nature of the perpetrators. This deliberate policy of mass starvation, intimidation, destruction and casual slaughter is not perpetrated by warlords or Juntas. It is not the work of the Lords Army or the Ton Ton Macoute. This is the deliberate systematic, lawless cruelty of an apparently democratic state allied to the most powerful nation on earth, a nation which daily colludes in its atrocities and provides impunity for its swaggering extra judicial murder.

Labour is a party that claims to oppose antisemitism.