George Galloway has issued a typically snide denial that he has any connection to Umar Farouk Abdulmutallab, the airliner bomber.

I have had several calls from the media about a meeting at which I am alleged to have spoken, organised by Umar Farouk Abdulmutallab,apparently a former president of the Islamic Society at UCL London.

There is no truth in this. It seems to be based on a YouTube video trailing a series of meetings entitled War on Terror at UCL in which excerpts from my Sky interview with Anna Botting were cut in. This canard was first raised yesterday by an alleged stringer from the New York Times who at first claimed this meeting occurred on January 29, 2007 and then, after a series of emails, said that he had made a ‘typo’ and that the real date was 2008.

To the best of my knowledge I have never met Abdulmutallab. I certainly did not agree to speak at any meeting organised by him and my House of Commons electronic diary confirms that I have not spoken at the UCL Islamic Society in the last three years. Several other of those alleged to have been invited also have no knowledge of any meeting,

This is an attempted smear by someone who has been repeatedly told that there was no truth in the allegation and who cannot provide even a scintilla of ‘evidence’, other than the Youtube video. I could easily produce a YouTube trailer of a meeting at Glasgow Concert Hall where Barack Obama was billed to host a seance where John Lennon would be brought back to life. This would have about the same credibility.

There is no truth in any of this.

Here is the announcement of the meeting, posted on an Islamic forum by “Farouk1986” (Abdulmutallab’s screen name):

In September 2001, following the attacks on the World Trade Centre, the U.S. and it’s allies launched an offensive on the perpetrators of the WTC attacks in what was to become known as the global War On Terror. Five years on, with the death of thousands of innocent lives and thousands more detained illegally without trial or judgement, UCLU Islamic Society, in collaboration with UCLU Stop The War and Amnesty societies, hosts an entire week dedicated to analyse the war on terror; it’s justifications, it’s realities and it’s effects.

Joining us for what will surely be a fascinating week will be some of the most prolific speakers in the country including, George Galloway (MP), Yvonne Ridley (Broadcaster), Moazzam Begg (Former Detainee at Guantanamo Bay), Victoria Britain (Journalist for The Guardian) and many more!

To check out the trailer for the week, go to www.uclisoc.com

Here is the promotional video for the event.

According to an Islamic student society newsletter (pdf), Galloway did not attend only because he was ill:

The fact that the lecture theatre was packed with people sitting on every available stair well in advance and with so many people turned away, speaks for itself. In all fairness much of this was because they were expecting George Galloway, who unfortunately couldn’t turn up for health reasons. Even so he was replaced by Chris Nineham, who did a terrific job of highlighting the injustices taking place in the name of freedom.

Other speakers such as Yvonne Ridley and Moazzam begg helped keep the week informative, relevant and always entertaining. The audience got involved with a good mixture of Muslim and Non-Muslim attendees asking tough questions of the speakers.

Here are pictures of the Tipton 3, one of whom admitted to joining a terrorist training camp in Afghanistan in Channel 4’s “Lie Lab”, Ridley, Nineham and Asim Qureshi at the event. 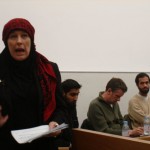