The leader of Al Qaeda in the Arabian Peninsula and a Muslim preacher linked by U.S. intelligence to deaths at a U.S. army base are believed to have died in a Yemen air strike, a security official said on Thursday.

Yemen said 30 militants were killed in the strike in the eastern province of Shabwa.

Among those believed killed was Anwar al Awlaki, whom U.S. officials linked to the gunman who killed 13 people at the Fort Hood army base in Texas on Nov. 5.

“Anwar al Awlaki is suspected to be dead (in the air raid),” said the Yemeni official, who asked not to be identified.

The air attack targeted a meeting of militants planning an attack on Yemeni and foreign oil targets, the official said.

He added that the leader of Al Qaeda in the Arabian Peninsula, Abu Basir Nasser al-Wahayshi, may also have been killed in the strikes but that there was no confirmation.

“We are still unsure if two of the top leaders have been killed or not. One of them is the … al Qaeda member Nasser al-Wahayshi,” he said, declining to say whether more strikes would take place on Thursday.

Awlaki was the spiritual guide to two of the 9/11 hijackers. He also performed a similar role for Major Hasan, who slaughtered his fellow soldiers at Fort Hood. According to Awlaki, the US Officer asked for guidance which we now know must have related directly to his murderous plans:

Hasan and Awlaki exchanged as many as 18 e-mails in the year prior to the shooting. As ABC News had previously reported exclusively, Hasan had discussed martyrdom with Awlaki, asking when jihad is appropriate, and whether it is permissible if there are innocents killed in a suicide attack. Hasan also told Awlaki he looked forward to seeing him in the afterlife and sharing non-alcoholic wine

Awlaki may well be enjoying that non-alcoholic wine in the afterlife.

Awlaki has many supporters in the United Kingdom, including a good number of those who are prominent in the British Islamist scene. They will be mourning him today.

Those of you attending the Dark Forces – The Enemy Within event at the East London Mosque/London Muslim Centre in the New Year will be able to buy a special discounted edition of his DVD lectures. 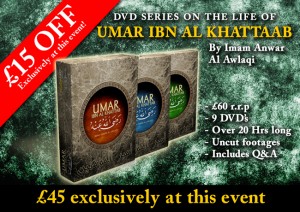