The Weekly Worker is predicting an imminent change of lifestyle for certain individuals well known to Harry’s Place.

John Rees and Lindsey German of the Socialist Workers Party came up with the strategy of allying the fading Trotskyist group to the rising tide of Islamism back in the days when the joint Stop the War Coalition/Muslim Association of Britain march of February 2003 was the talk of the town. They saw a sea of discontented Muslims and envisioned recruits galore. Unfortunately for them the Islamists got the better of the hopeless Trots and the latter, easily outmanouvred by the former a few years later, left the SWP with little to show for its efforts other than a certain amount of egg on face.

Political actions have consequences and chickens have an uncomfortable habit of coming home to roost though.

An internal SWP bulletin leaked by a public-spirited comrade will be making for very uncomfortable reading in the German/Rees household this festive season. Here’s a selection of contributions to that pre-conference bulletin from members of the SWP rank and file – who appear to have been encouraged to vent some rather unpleasant spleen in the direction of the Rees loyalists:

“Comrades in the Left Platform … harbour a fetish for a caricature of democratic centralism, nostalgia for a bygone age of … decisive leadership, where comrades know their place and simply obey the latest commands from the centre.” That’s from Comrade Raymond.

Adam and Paris from Leeds refer to “John Rees and the renegades and charlatans of the Left Platform”.

Andrey (party centre) was even more scathing, writing: ‘I demand that we shoot the mad dogs – every single one of them!’

Actually that last quote was made in slightly different circumstances by someone else, but you don’t have to be a genius to see which way the wind is blowing for the poor buggers who have tied their colours to the Reesite mast. If the Weekly Worker is correct in its analysis of the inner-party  struggle – and I suspect they are – then charges of factionalism will be being drawn up as you read this, and Rees and German will eventually be added to the pile of ex-Trots hoisted on petards of their own making and expelled from the party they gave the best years of their lives to.

So farewell then John and Lindsay. It’s been fun taking the mickey out of you for the last seven years, but I’m more than a little relieved your brand of political opportunism is fading fast. The fact that even a group of ageing radicals desperate to do anything – however antithetical to their previous beliefs – if it promised snarling, loudmouthed recruits by the score has decided that Trot/Islamists lash-ups are out of fashion is an early present we can all take continuing pleasure from.

Happy Christmas, one and all. 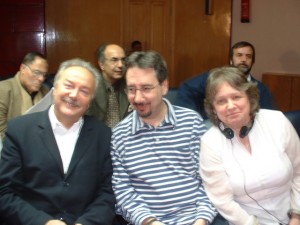