Pnina Comporati, a 51 year old Israeli woman of a Yemenite background owns the Pnina Pies bakeries in Ashdod and Gan Yavneh in Israel. Haaretz reported earlier this year about her battle with rabbinical authorities about her kashrut certificate. After the Chief Rabbinate Council and the Ashdod Rabbinate imposed harsh terms upon her business in 2006, Comporati petitioned the High Court in 2007, highlighting discrimination against her on the basis of her beliefs.

The High Court ruled in favour of Comporati, judging that:

‘the only considerations the rabbinate may consider in granting kashrut certificates are those directly related to kashrut. As long as the applicant’s personal beliefs do not affect the kashrut of the food, the rabbinate has no right to discriminate on account of these beliefs.’

“the trustworthiness of a restaurant owner must be measured according to standards of general law, and not according to Halakhic standards.”

However, not everyone is happy:

The anti-missionary Yad L’Achim organization responded with outrage to the ruling, saying that missionaries will now be able to open restaurants featuring kashrut authorization accompanying their missionary activities.

“It is unprecedented and grave,” Yad L’Achim announced, “that the local Chief Rabbinate is not authorized to remove the kashrut certification from an establishment that identifies clearly with the Jewish Messianic missionary cult and cannot be trusted to keep the laws of kashrut.”

Yad L’Achim Director Rabbi Shalom Dov Lifshitz has asked the Chief Rabbis to call an urgent meeting of rabbis to discuss the matter. He has also called upon religious Knesset Members to work to change the legislation in order to prevent this from happening. “This must be done immediately,” he said, “even if it causes a coalition crisis. Otherwise, missionaries, armed with official kashrut certifications, will be able to entice religious people into their waiting arms.”

Let’s get some perspective here.

Pnina Conforti is not a missionary but a baker.

She is a 51-year-old woman, trying to run her business in the face of tremendous, senseless opposition.

Why do Yad L’Achim fear her so much that they must force the law to deny her a kosher licence?

Here’s a poster that went up against Pnina in Gan Yavneh: 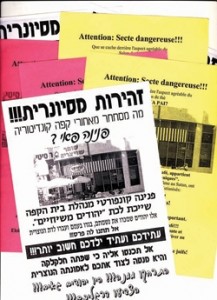 What is hiding behind the Café-Bakery?

Pnina Comforti, manager of the Café, belongs to the cult of Messianic Jews. These are Jews who sold their souls, betrayed their nation, and converted to Christianity.

Your future and that of your children is more important.

Do not enter (the café) because with her sweet talk, she will try to ensnare you to her  Christian religion.

Stay away from her!  Be proud Jews! Vote with your feet!

So, are Yad L’Achim right that Pnina’s Pies will entice the unsuspecting?

I came across Pnina Pie in January when I visited Gan Yavneh during the war between Israel and Hamas in the Gaza Strip. Missiles from Gaza landed several times on this small town, which is home to an air force base and several thousand Tel Aviv commuters.

I concluded an interview with the town’s mayor by asking him where I could get a decent lunch. He directed me to Pnina Pie, where a young Russian immigrant served me excellent bourekas, flaky pastry triangles filled with potato and cheese.

Unaware of the lack of a kosher certificate at the establishment, I bought a strawberry pie and served it to some guests that night. It happens all four of these friends were observant Jews.

At least they were observant Jews. Maybe by now they believe in Jesus.

After all, it really was very good pie.

The real issue, of course, is nothing to do with theology or practice – or pies for that matter.

It is about whether in the 21st century, it is acceptable to discriminate against members of religious minorities within a democratic country, whether a democratic state should have a ‘window into the souls’ of its citizens, and whether serious measures will be taken against those who issue death threats to middle-aged women trying to make a living.