Readers may be forgiven for not being aware that the once mighty Stop the War Coalition organised a march in London last Saturday against the presence of Western troops in Afghanistan.

With fewer than five thousand ill-clad misfits wearily trudging the streets of London only to have to listen to the badly amplified and poorly expressed thoughts of the usual suspects at journey’s end – Tony Benn, Tariq Ali, Lindsey German etc – you might wonder how the average Trot raises the mental energy to get out of bed these days.

Having said that, did anyone notice that the rather small march seemed to get more than a fair amount of media coverage ? Why might that have been? The Weekly Worker has the answer.

Here’s a clue: not merely a marriage of convenience between scruffily bearded students with nothing better to do, a dwindling coterie of washed-up revolutionaries and the Islamist raggle-taggle rank and file, they’re actually pretty significant people when you sit down and think about it, very important in the grand scheme of things actually. Their efforts are definitely not in vain, not at all. No sir.

Over to the comrades:

“For once a Stop the War march got the media coverage it deserved,” declared the STWC (newsletter, October 26). Yet it was one of the smallest for many years. Its significance lay elsewhere. The change in attitude of the media is not a symptom of finally being won over by the sheer force of STWC arguments. Divisions in the ruling class over Afghanistan are becoming more apparent between those who now view the war as unwinnable and a waste of resources, and those who believe it is worth staying to ‘finish the job’. Giving positive coverage to and even exaggerating the likely support for Saturday’s demo is perhaps a sign of a section of the establishment (not least senior figures in the BBC) identifying with the first of those camps.

Not just the BBC, but senior figures no less. Well I guess it does make it easier to lace up your walking boots again if you think the state broadcasting arm is ‘taking a lead’ from your actions.

A further implication of this coverage may be an awareness of the current divisions in the Socialist Workers Party. The former SWP leadership of John Rees, Lindsey German and Chris Nineham is still running the STWC in alliance with Andrew Murray of the Morning Star’s Communist Party of Britain. Last year comrade Rees was booted off the SWP central committee, while German and Nineham stood down in solidarity with him. Now they have hit back with the formation of the Left Platform opposition faction. Comrades German and Rees have accused the current SWP leadership around Martin Smith, Alex Callinicos and Chris Harman of playing down the importance of the STWC and other ‘united fronts’. It is more than possible that the same ruling class elements have noted this internal conflict and can see the benefit of building up the STWC, together with its Left Platform leaders, in the hope of reducing the SWP’s influence over it and eventually turning it into a bourgeois pawn.

These ‘ruling class elements’ have got their work cut out for themselves haven’t they? Companies going bust all over the place, eye-popping national debt, terrorism, wars, failed states, nuclear proliferation, mass unemployment – and still they find time to drag John Rees and Lindsey German across a gigantic chessboard in a strategic game mere mortals like us fail to comprehend. 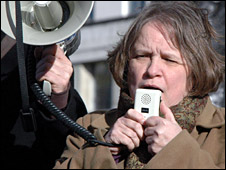