At Generation Y, the brave Cuban blogger Yoani Sanchez posts photos of the exterior of Canaleta prison in Ciego de Ávila. She writes:

I have several friends there, mostly independent journalists imprisoned since the Black Spring of 2003. Some of them dictate by telephone to various bloggers—such as Claudia Cadelo, Iván García, Reinaldo Escobar and me—news that we post on the Internet. Which makes me think that there are no bars enclosing opinion and that cyberspace has the capability—also—to slip between the bricks and mortar of these dismal places.

The Cuban regime arrested and imprisoned 75 Cuban dissidents in 2003, 54 of whom remain behind bars.

How perfectly appropriate that Che Guevara’s eternal visage appears on the walls of the prison. 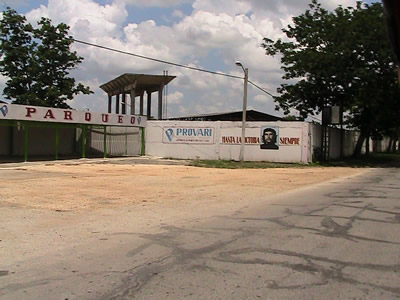 After Batista was toppled in 1959, Fidel Castro put Guevara in charge of La Cabaña prison, where he oversaw the summary executions of about 200 prisoners.

In perhaps related news, Attorney General Luisa Ortega Díaz of Venezuela– appointed by Castro’s comrade Hugo Chavez– threatened to arrest “all those” who disturb the “tranquillity and public peace” in the country. Has Chavez found his Che?