The following is a guest Post by ‘Labour Loyalist’

The Labour Party has not suffered a catastrophic defeat in this week’s elections — the Labour Party is in total meltdown. Unless something is done, something radical, then Labour will be massacred at the next general election and could face years in the political wilderness. It didn’t have to be this way and it still doesn’t. Labour could do something it has seemed incapable of doing under Gordon Brown’s leadership – react, quickly and decisively to change the dynamic of a situation.

There are scores of statistics that could be used to highlight just how bad things are for Labour – here is a particularly alarming one:  The party’s vote in the south-east of England was roughly level to that received by the BNP in the north-west. A fringe party in ’middle England’.

Labour were driven into third place on the UK wide vote by a party of eccentrics who think the Tories are too left-wing, they lost Wales to the Tories for the first time in 100 years. Labour has never polled under 20% in a nationwide election in its history.

If Gordon Brown were a football manager – he has just relegated Manchester United to League One and been beaten by Dagenham and Redbridge 4-0 in the Cup — at home.

And yet Labour MP’s can do little more than pass around a few tentative emails. They are rightly frightened, yet they are frozen by that fear rather than agitated by it.

The problem, half-hearted loyalists to Brown will tell you, is that there really isn’t an alternative. Would David Milliband or Alan Johnson really turn things around before the next general election? Well, they have a point, Labour’s best talents departed the cabinet over the past three years and there isn’t much quality left to choose from.

Which is why Labour must now do what is at the back of everyone’s minds but which no-one has the balls to stand up and say – Bring Back Blair.

Sure, Blair lost popularity due to the Iraq war and the liberal media and those who sheepish follow their line did their best to drive the most successful leader in Labour’s history out of power. It will be hard for some to swallow if Blair came back to try and save the party but they will have to put their pride aside and accept the fact that their man wrecked in two years what had taken decades to build. Brown has been a disaster for Labour.

Blair made Labour electable, won three elections and then handed over to the man who had plotted against him and sought to undermine him for so many years. It was the worst decision Blair ever made. Brown in power, has needed just 23 months to send Labour back to Michael Foot levels of support.

Now with a Tory government looking inevitable and right-wing nationalists growing in strength all over the country – UKIP in the south, BNP in parts of the North and the SNP in Scotland – Labour cannot sit on its hands any longer.

Blairites always said – the alternative to New Labour doesn’t come from the left but from the right and now we are seeing the truth of that.

Why would Blair want to come back? Well, his legacy is about to be totally squandered. Does he want that? Or does he want the chance to come back and win a record fourth election? Surely he is persuadable. His current job cannot be satisfying and on a purely personal level the idea of taking over from a failed Brown must have some appeal.

Blair returning would be an astonishing global news story – it would change the narrative of British politics from the inevitable decline of Labour to the improbable but exciting story of the comeback.

There are no guarantees of course but I challenge anyone to produce the name of a Labour leader who would be a better bet to beat David Cameron in the next general election?

There has been a lot of talk about ‘Blairites’ in the papers recently — it is time for those who truly are loyal to New Labour and hope to continue the successes of that political project to go and speak with the man himself and convince him that his party and his country need him. Badly. 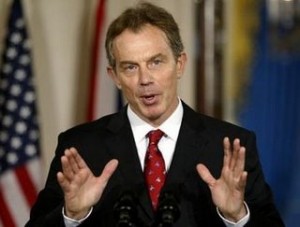