I’m generally not a fan of what’s called performance art, but it’s impossible not to admire the bravery of this particular work and its participants.

Cuban authorities accused blogger Yoani Sanchez on Wednesday of staging a “provocation against the Cuban Revolution” after she and others spoke publicly about censorship during an arts performance in Havana.

Sanchez, whose “Generacion Y” blog is critical of Cuba’s government and widely read abroad, took the microphone during an event on Sunday in the Havana Biennial arts festival and read a manifesto saying the Internet was opening a “crack” in government control.

“The time has come to jump over the wall of control,” she said. 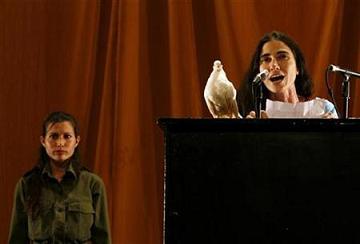 In response, the Biennial organizing committee posted a statement on the Internet saying it “considers this to be an anti-cultural event of shameful opportunism that offends Cuban artists and foreigners who came to offer their work and solidarity.”

The statement described Sanchez, without using her name, as a “professional dissident” and one of a number of “individuals in the service of the anti-Cuban propagandistic machinery that repeated the worn-out claims for ‘freedom’ and ‘democracy’ demanded by their sponsors.”

Cuban authorities consider dissidents to be mercenaries working for the United States, which has openly supported opposition to Cuba’s communist-run government.

The event was part of a performance by Cuban artist Tania Bruguera, who put up a microphone at an arts centre in Old Havana and told people in attendance they could say whatever they wanted for one minute.

Participants were flanked by two actors dressed in olive green fatigues. A white dove was placed on the shoulder of each speaker in an apparent parody of a famous speech by Fidel Castro.

In January 1959, as Castro spoke to the masses in Havana declaring victory over dictator Fulgenico Batista, a white dove landed on his shoulder in what was said to be a moment of serendipitous symbolism.

I’ve posted about Yoani Sanchez before. Her beautifully-crafted and corageous blog posts are translated lovingly into English by volunteers. To borrow a worn-out movie-advertising slogan: if you read only one blog, make it hers.