Journalist Yvonne Ridley is on the Viva Palestina convoy, bouncing through the French countryside in an old banger en route to the aid caravan’s ultimate destination – the far-off and war torn Gaza strip.

How are living conditions on the trip Yvonne?

This morning I expect many of us are bleary eyed as the convoy heads for Bordeaux – I know I am, after a sleepless night trying to find a comfortable position to sleep in a car seat.

Kipping down for the night in a car seat? Sounds pretty uncomfortable for a person not exactly in the first flush of youth. Any physical complaints?

My eyes feel like sandpaper every time I blink.

Hmm. That doesn’t sound good. Not when you need your eyes to blink and stuff. I might be tempted to complain to the management if I were you…

Well, no. I suppose not. The trip does have a noble aim – bringing aid to a land blasted by war. And I suppose if everyone on the convoy is in the same uncommodious boat then the absence of anything but the most fleeting of sleep, the pain brought on by contorted spines and the feeling that your corneas have been buffed with glasspaper when you wake up in the morning might be a little more bearable. A trouble shared is a trouble halved and all that.

Except of course for the fact that the collective of convoy-goers are only nominally equal when it comes to putting up with the hardships of life on the road.

Some, of course, are more equal than others. Much, much more equal.

Regular readers of Harry’s Place will be able to guess what’s coming next.

Here’s how George Galloway will be travelling to the Holy Land:

You’ll find him at the head of the column, where the cameras can see him. Driving a Mercedes 4×4.  This being George, he has a Winnebago motorhome in which to sleep while everyone else has to kip down in tents or in their cabs.

A power-asisted Mercedes to drive and a plush Winnebago to sleep in? Isn’t that a bit, erm unfair? Especially when everyone else is so obviously suffering, wrestling with the heavy steering of their rusting jalopies all day, and snatching a few hours of uncomfortable sleep in them by night. You might think such glaring inequality was against the very principles Galloway professes to be fighting for, wouldn’t you?

“I am 54 years of age,” he says with a look that dares a challenge.

Well, it might not be polite to bring up a lady’s longevity, but according to Wikipedia, sister Yvonne is only a handful of summers behind you George. What do you have to say to her?

“I do have to appear on television when we stop.”

How utterly depressing but yet so revealing that litle sentence is. Chivalry is clearly and unceremoniously trumped by mere vanity in Galloway’s opportunistic worldview.

Is George making any sacrifices at all? Well, in his mind at least, foregoing the UK airwaves and being denied his parliamentary pulpit for the whole time it takes to drive to the other side of the Mediterannean must be one mustn’t it?

He will actually fly back to London for three days a week, to host radio shows and his surgery as MP for Bethnal Green and Bow, while the others press on.

You’ve got to admire his gall, haven’t you? Flying in every few days to appear on Arab television to stoke his personal profile, while not actually having to endure the actual privations of the trip is a masterstroke of Gallowegian cunning and shameless hoodwinkery.

Galloway really is extraordinarily lucky to find people who still take him seriously. To count among his left wing followers countless footsoldiers who raise no complaint about the lavish lifestyle he’s become accustomed to is one thing, but finding among those a humble journalist who curls up in a footwell every night, staring plaintively at the sumptuous accomodation denied to everyone else but the Gorgeous one, and yet who claims in public that no-one is on a jolly is evidence of something else entirely.

Poor Sister Yvonne is little more than one among many of the supine and uncomplaining of Galloway’s impressive collection of complete and utter suckers. 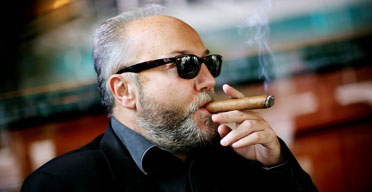