Why does this not surprise me:

The BNP says revelations about its candidate’s criminal past as an animal rights activist will “increase its share of the vote”.

Lewis, who is fighting the Waddon by-election in little under a week, was handed a six-month prison sentence.

But Mr Bailey told the Advertiser this week: “It’s free advertising. There’s no such thing as bad publicity.

“It’s extra publicity for us and it will increase our share of the vote.

“It was ages ago. I honestly don’t feel it’s worth commenting on. I’m not going to make a big deal out of it.”

The activist was linked to the letters she sent current and former staff of the Cambridgeshire firm after DNA in her saliva was matched with that on the envelopes.

Lewis will be fighting the Waddon by-election on behalf of the BNP on Thursday next week (February 12).

A concerned Croydon resident said of the choice of candidate: “For a party like that to put up somebody like this is absolutely outrageous.

“What kind of political party stands candidates like that?”

Lewis was sentenced to six months in jail in January 2001 at Peterborough Crown Court.

But Mr Bailey said the conviction would not damage the BNP vote.

“She only sent some letters,” he said. “If you have met Charlotte you will know that she hasn’t got a threatening bone in her body.

“She was punished for what she did and we believe in giving people a second chance. We didn’t think that it should hold her back from standing as a candidate.”

Not a threatening bone in her body?

The letters she sent included phrases like “Dear animal abusing scum” and one displayed the chilling warning: “If you don’t quit HLS then your life will not be worth living.

“You will always have to be looking over your shoulder.”

In another she wrote: “This is a warning. Your life is in grave danger if you don’t stop working at HLS.

“You will find yourself having a gun aimed at your stupidly ugly head.”

Judge Richard Pollard had told her the letters had brought “fear and anguish to people going about their peaceful and lawful business”.

The court was told Mrs Howlett, who had not worked at HLS for two years when the letters were sent, was left “hysterical and very scared”.

The BNP shouldn’t be so relaxed about the damage this revelation will cause them. One commentator remarks:

Bunnyhuggers National Party .
This woman has lost you a lot of support
Fox Hunter, Croydon 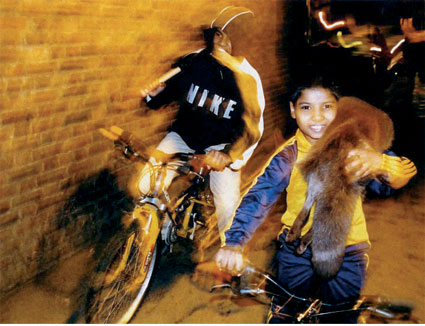