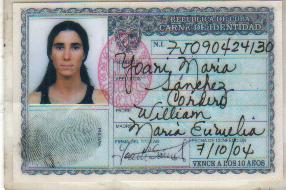 In his excellent post ridiculing Sean Penn’s reverent account in The Nation of his recent meetings with Hugo Chavez in Venezuela and Raul Castro in Cuba, Marc Cooper wrote:

For an infinitely more incisive and — I might say– a more morally elevated discussion of Cuba from a thoughtful and quite courageous Cuban writer, I refer you to the dazzling Generation Y blog from Havana-based Yoani Sanchez. Please check it out and make sure you cast a vote for her blog which is currently up for a Bobs award (Yoani has already won the coveted Ortega y Gasset prize — which is probably what keeps her out of jail). [Note: Yoani won the Bobs award, which I hope will provide her with additional protection from imprisonment.]

Here’s an excerpt of one of her recent postings titled “I’d Love to Choose.”. It cuts neatly, simply and cleanly like a blue-steel machete through the sort of drivel produced by Penn:

For weeks, there are words like “ballot box,” “votes,” and “candidates” that persecute us everywhere. First there were the elections in the United States and now the issue has been revived with what happened on Sunday in Venezuela. It’s as if at the end of the year everything conspires to remind us of our condition as non-electors, our limited experience in deciding who leads us.

You become accustomed to not being able to choose what to put in your mouth, under which creed they will educate your children, or to whom to open the door, but that resignation shatters when you see someone else vote. Because of this it has risen up, these days, the desire to fold the ballot, to push it into the slot and to know that with it goes my stentorian shout that demands: “to choose.”

To understand a part of what it’s like to live in Cuba, consider that it’s possible to gaze longingly from there at elections in Venezuela.

Yoani writes about her life in Cuba in what I can only assume (based on the English translations) is beautiful Spanish, and relies on volunteer translators to render it into other languages. She makes no effort to hide her identity, and in fact displays her state identity card. (See above.) The message to the authorities is: “You know who I am. If you want me, come and get me.”

Although her feelings about the regime are clear, she just as clearly loves Cuba– the land and its people, the rhythms of life there. In fact she left the country in 2002, only to return two years later.

Like virtually all Cubans, Yoani has no access to the internet at home. A Wall Street Journal piece about her last year described her blogging technique:

On a recent morning, Yoani Sánchez took a deep breath and gathered her nerve for an undercover mission: posting an Internet chronicle about life in Fidel Castro’s Cuba.

To get around Cuba’s restrictions on Web access, the waif-like 32-year-old posed as a tourist to slip into an Internet cafe in one of the city’s luxury hotels, which normally bar Cubans. Dressed in gray surf shorts, T-shirt and lime-green espadrilles, she strode toward a guard at the hotel’s threshold and flashed a wide smile. The guard, a towering man with a shaved head, stepped aside.

“I think I’m able to do this because I look so harmless,” says Ms. Sánchez, who says she is sometimes mistaken for a teenager. Once inside the cafe, she attached a flash memory drive to the hotel computer and, in quick, intense movements, uploaded her material. Time matters: The $3 she paid for a half-hour is nearly a week’s wage for many Cubans.
…..
The [blog’s] name refers to a fad for names starting with “Y” that began in the 1960s. Cuba’s boxing team, for instance, has members named Yoandry, Yuciel, Yampier and Yordenis. Roughly between 25 and 40 today, people in this generation are the offspring of the revolutionaries. Weaned on Soviet cartoons and Communist slogans about a “luminous future,” they came of age amid shortages of food, clothing and soap as the economy crumbled.

Some in the Cuban exile community don’t entirely trust her, and suspect she is being used by the regime. She replies: “It’s funny, but it seems that the only way some people will believe I am authentic is if I am thrown in jail”– as other Cuban dissidents have been, and where some remain. Of course it probably helps to keep her free that her blog is unavailable in her homeland to all but the few Cubans with internet access.

In her low-key, understated prose, Yoani posts devastating first-hand accounts of the wretched conditions of daily life in Cuba, quietly puncturing the propaganda believed by many on the western Left.

Here she is on visiting a part of the country devastated by Hurricanes Gustav and Ike:

The two backpacks of medicine and clothes we’d gathered among friends turn out to be very limited for all the needs facing us. Food is scarce, especially, and ironically, that which comes from the furrows. Even the children, who normally pick out the pieces of cucumber from their plates, miss the peculiar flavor of this vegetable. The land delays its healing. The small independent farmer has seen increased pressure to sell his crop to the State rather than in the free markets, where he could reap greater profits. This generates disinterest in production, and empty stalls at the points of sale. Again, as in those years of adversity in the nineties, it’s necessary to leave the city to buy yucca, onions or a piece of pork.

Between Havana and Pinar del Río there are two police checkpoints choosing cars at random to verify no one is trafficking in milk, cheese or food. Like the sophisticated medical devices that look inside the human body, people have baptized these checkpoints “CAT scans.” In the stretches of highway without patrols, illegal vendors show their merchandise and hide themselves whenever a vehicle with official plates passes.

Although for the media the news of disaster is fading from view, in the lives of the victims it’s the lead story of every day. We have to avoid letting our tendency to forget cover up the situation, letting the triumphalism make us believe that everything’s already over, letting the avalanche of positive reports deceive us about the depths of the catastrophe. I remind everyone that we have to go to the affected areas, deliver aid directly, and record the testimonies there. The hurricane-force winds are still blowing in the lives of these people and will not diminish because we cover our ears.

Here she ruminates on a a billboard near her house: 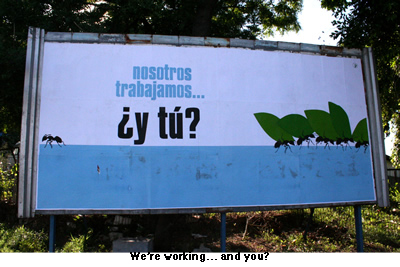 On the left, below this billboard, you could see a woman who sells coffee at the corner of my house, who gets up at five to brew it and plays hide-and-seek with the police. The young man who left his studies and sews shoes at the workshop of his cousin, though the Sector Head considers him an habitual vagrant, a derelict, who refuses a job commensurate with his qualifications because he’s not politically correct. Many could be the tiny ant who carries no leaves in his hands… because the others are not only the workers, but also the authorities, the group of those who never get out of line.

And here she describes a visit to a hospital to see a friend’s mother. (It is obviously not one of the model hospitals to which foreigners and Cuban big shots are admitted.)

A bucket in one hand, a pillow under my arm, and a fan balanced on my hip. I enter the door of the oncology hospital and the backpack over my shoulder blocks the custodian from seeing my face. It’s of little importance because the man is used to the fact that the patients’ families must bring everything, so my Baroque structure of fans, bucket and pillowcase doesn’t surprise him. He doesn’t know it yet but, in a bag hanging off me somewhere, I’ve brought him an omelet sandwich so he’ll let me stay after visiting hours.

I come into the room and Mónica is holding the hand of her mother, whose face is increasingly haggard. She has cancer of the esophagus and there is little that can be done, although the woman still doesn’t know it. I’ve never understood doctors’ refusals to inform one, directly, how little time is left before the end; but I respect the decision of the family, although I don’t join in the lie that she will soon be well.

The room has a thin light and the air smells of pain. I begin to unpack what I’ve brought. I take out the little sack of detergent and the aromatic with which I’ll clean the bath; its aroma floods everything. With the bucket we can bathe the lady, using the cup to pour, because the water faucet doesn’t work. For the great scrubbing I brought a pair of yellow gloves, afraid of the germs that spread in a hospital. Mónica tells me to continue unpacking and I extract the package of food and a puree especially for the sick. The pillow has been a wonder and the set of clean sheets manages to cover the mattress, stained with successive effluvia.

The most welcome is the fan, which I connect to two peeled wires hanging from the wall. I continue to unpack and come to the little bag of medical supplies. I have obtained some needles appropriate for the IV, because the one in her arm is very thick and causes pain. I also bought some gauze and cotton on the black market. The most difficult thing—which cost me days and incredible swaps—is the suture thread for the surgery they are going to do tomorrow. I also brought a box of disposable syringes since she yells to high heaven when she sees the nurse with a glass one.

To distract her, I’ve come loaded with a radio, and a nearby patient has brought a television. My friend and her mom can watch the soap opera, while I look for the doctor and give him a gift sent by the sick woman’s husband. When bedtime comes a cockroach crosses the wall near the bed and I remember that I also brought some insect spray. In the backpack I still have some medicines and a little gift for the girl in the lab. I have money in my pocket, because ambulances are for the most critical cases and when they send her home, evicted, we will need to take a Panataxi.

In front of our bed there’s an old woman who eats the watery soup she’s been given by the hospital staff. Around her bed there’s no bag brought by her family and she doesn’t have a pillow for her head. I position the fan so that she will also get the cool air and talk about the arrival of another hurricane. Without her realizing it I touch the wood of the door frame, whether to expel the fear of disease or in horror at the conditions in the hospital, I don’t really know. A woman passes by shouting that she has bread and ham for sale for the visitors and I lock myself in the bathroom which smells like jasmine after my cleaning.

In his essay on Charles Dickens, George Orwell described him as someone “who fights in the open and is not frightened.” I think it’s a tribute he would have gladly paid to Yoani Sanchez.

Update: Yoani blogs with her usual eloquence and sharp wit about receiving an invitation to visit the Ministry of the Interior and about her and her husband’s encounter with the folks there. Needless to say, we will stand in solidarity with them come what may.