Obamania may not live long at all. This divided and fractious world will see to that, I am sure. Even in the best of times, which are not ours, how can a man who has drawn so many to his side keep them all pleased? Or even most of them?

Pakistan may be the first place where some misplaced hopes die. If Obama is as serious as he says is about going after jihadis along the Pakistan-Afghan border, in this at least he will be something of a Bush 2.2. Meet the Predator and its fans. They’re pretty busy right now.

And yet there is a bit of the mania that makes me and so many others so happy, and we are right to be happy.

I grew up in this kind of America: 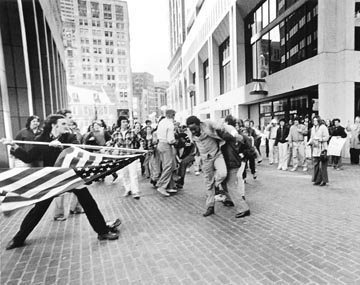 That is one of the most disgraceful desecrations of the flag I have ever seen. It really hurt. There was so much pain, anger, hatred and violence back then, even in Boston, a bastion of abolitionism. Or especially in Boston, as some southerners may sneer, and they would have a point, I guess.

I do assess Obama on his merits, not his skin. I was a bit wary, really, as one of the group that people sometimes call “national security voters”. Only General Powell sealed it for me. I don’t expect to be too disappointed. We shall see.

Still, for so many of us who lived through those times, the symbolism of Obama’s victory is important too. And beautiful. I’ve never been so joyful to see so many people crying. The well of those tears is very deep, but maybe it will finally dry up now. There will be plenty else to cry about in the years to come, I fear.

My fondest hope is that, somehow, President Obama will help the Middle East and South Asia to find at least a semblance of peace. Reconciliation can wait.

I’m not optimistic. There will be lots more fighting in the foreseeable future. But even the very worst conflicts do come to an end, one day. Look to America for proof.