It’s been a while, I’d meant to write earlier, but learning Arabic is time consuming, exhausting, often frustrating and requires an intense amount of concentration.

The interesting thing about learning another language is that you end up learning about yourself. You view the world, and yourself in a slightly different way. Stuff that used to bother you no longer has an effect and you discover new things that really start to bug you.

For example outright extremism no longer bothers me. It is what it is. There is a hell of a lot of it out there and there’s nothing I can do to change it.

Now what I can’t stand the is double-speak, the oblique references, the euphemisms, the rhetorical questions, the passive form, the indirect way of saying anything, the constant use of clichés, and of course the silence and the denial.

In short, it’s the semantic dodges that I keep coming across which really irritate the hell out of me. And I must add that they piss off many native speakers too.

These phenomena didn’t just occur by accident. It’s a way to avoid being held to account for your actions and statements, and to side step any uncomfortable truths.

An effect of this way of speaking is that it’s very difficult to translate, as in order to for it to make sense in English you have to completely change the reference points. Then it’s no longer translating but instead becomes decoding.

For example even within one language, when you say X but really mean Y, you can always use the “that’s not what I meant. I’ve been misinterpreted” get out clause.

When you translate this into another language the gap between X and Y increases exponentially so there’s plenty of room to retreat behind the “that’s not what I meant. I’ve been mistranslated!” cop out time and time again.

An Al Jazeera report aired on 26th September about Al Quds day in Tehran is full of these semantic dodges.

(Voiceover Milham Raya of Al Jazeera)
“With no banner here higher than ‘Death to America & Israel’ thus began Al Quds Day in Tehran’s streets. The demonstrators gathered denouncing Israel’s occupation of Palestine along with America’s policies, which they regard as always supporting Israel.

(Person in street standing in front of a Hassan Nasrallah placard)
“I think that a Palestinian referendum on Israel’s existence, as suggested by president Ahmadinejad, is the [only] way for peacefully solving the issue of Palestine”

(Demonstrator holds up banner reading in Arabic “Our Weapons are [i.e. armed] Resistance and Boycott”)
‘Demonstrators called for [armed] resistance to the occupation and boycotting US products as the first steps towards returning the rights of Palestinians.’

“Mutual threats come from each side aiming to nullify the other.

“However the Israeli threats to Iran haven’t changed the position [which is] opposing Israel’s fingers of accusation [i.e. accusing Iran] of creating a crises in the area”.

(Woman in street)
“Israel is unable to attack Iran. Its threats are a result of its weakness and failure. We are permanently prepared to confront it.”

(Raya)
“In Palestine Square in the centre of the capital Tehran, once again they instigate the matter of the Holocaust”

“However this time doubts about the Holocaust come from a book which is a collection of cartoons and caricatures around the issue of the Holocaust.

“The official government position doesn’t differ a lot from the popular opinion. Neither the people nor government recognise Israel.

“Even some of the observers believe that the Iranian problem with America [i.e. which I think in this case means the problem America has with Iran] lies with Israel, and not with its [Iran’s] nuclear programme which is being used as a pretext to oppose the Iranian regime”

(Akbar Hashemi Rafsanjani)
“I don’t know what the missiles have to do with [Iran’s] nuclear programme – even [Muhammad El] Baradei says so in his report. These missiles are for the defence of Iranian land in the face of any assault. It’s true that the Caucasus crisis [Georgia] has decreased the threat of this nuclear issue, how it is still burning under the ash. [i.e. it’s still there waiting to erupt].”

“However these missiles are ready, according to the military leadership, to strike right to the heart of Israel, at any time that Israel attempts to strike its nuclear facilities. – Milham Raya Al Jazeera, Tehran.”

Notice the style of the language used. It’s passive, metaphorical, vague and guarded. When he speaks of Israel being a problem, he does so by attributing that to the claims of “some observers” he won’t say who they actually are.

His claim that neither government nor Iranian people recognise Israel is total crap.

It means something completely different to Ayman Al Zawahiri than it does to Archbishop Desmond Tutu.

So why didn’t Raya make it clear that the protesters were condemning Israel for just being there? That way everybody watching is clear on what is actually taking place.Why the linguistic cop-out?

Again and again in the report he uses vague language. For example – confronting Israeli fingers of accusation?

Fingers? What fingers? Where? When I see angry Iranians burning effigies fingers is the very last thing on my mind. It wasn’t even ‘finger’ of accusation. It was ‘Israel’s fingers’! Plural.

How does that even work? Believe me. I’ve tried. If you use more than one finger it looks like you’re trying to shake somebody’s hand. If you use both hands you end up looking like this. It’s not exactly what you’d call threatening.

What’s wrong with just saying they oppose Israeli accusations? That would more sense. Why fingers? What next? “The toes of allegation”?

In democracies we confront accusations with evidence which disproves them. I can be so naïve at times thinking that’s what everybody else does because it seems so logical.

I must confess, that bit took one hell of a long time to translate. I’m talking hours even to work out what was actually going on. This is even worse than trying to make sense out of some of the stuff Sarah Palin comes out with! So if there are any defects in my translation you now know why.

Raya, the Al Jazeera correspondent, goes on to say that the issue of the Holocaust was stirred up and that it was doubted in a book of cartoons around this issue.

Since when was the Holocaust an ‘issue’?

It wasn’t an ‘issue’ or a ‘matter’ or a ‘case’ or an ‘affair’. It was a crime. A systematically planned genocide in which the perpetrators murdered six million men, women and children. Why euphemise it as “issue” or “matter”? Call it for what it was. This isn’t some linguistic or cultural thing as Arabic can be spoken directly. I just wish it was spoken directly more often.

Second, the book didn’t just doubt the Holocaust. It took the piss out of it, ridiculing both victims and survivors.

Raya doesn’t mention any of this in his report, nor does he mention that student members of the Basij militia wrote the book and that Iranian education minister Alireza Ali-Ahmadi was there attending its launch on Al Quds day.

TEHRAN (AFP) — Iranians chanted “Death to Israel” on Friday as Islamist students unveiled a book mocking the Holocaust in an Al-Quds (Jerusalem) Day annual parade to show solidarity with the Palestinians.
…….
The book “Holocaust,” published by members of Iran’s Islamist Basij militia, features dozens of cartoons and sarcastic commentary.

The cover shows a Jew with a crooked nose and dressed in traditional garb drawing outlines of dead bodies on the ground.

Inside, bearded Jews are shown leaving and re-entering a gas chamber with a counter that reads the number 5,999,999.

Another illustration depicts Jewish prisoners entering a furnace in a Nazi extermination camp and leaving from the other side as gun-wielding “terrorists.”

Yet another shows a patient draped in an Israeli flag and on life support breathing Zyklon-B, the poisonous gas used in the extermination chambers.
………..
The commentary inside the book includes anti-Semitic stereotypes and revisionist arguments, casting doubt that the massacre of Jews took place and mocking Holocaust survivors who claimed reparations after World War II.

One comment, in a question-and-answer format, reads: “How did the Germans emit gas into chambers while there were no holes on the ceiling?” Answer: “Shut up, you criminal anti-Semite. How dare you ask this question?”

The demonstration was held under an official slogan: “The Islamic world will not recognise the fake Zionist regime under any circumstances and believes that this cancerous tumour will one day be wiped off the face of the earth.

Raya’s report dodges the issue by not showing us or the viewers exactly how offensive these cartons are.

Have a look for yourselves: 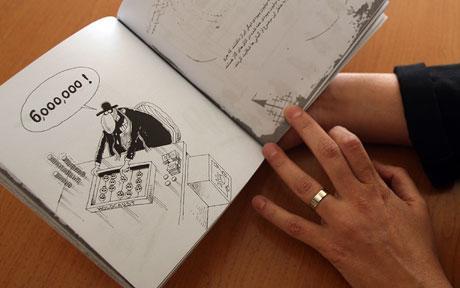 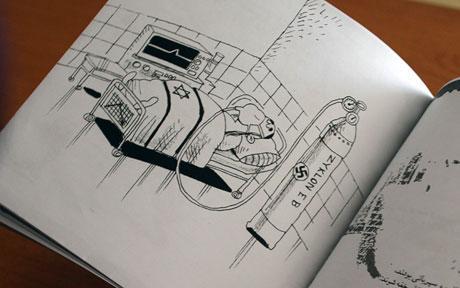 For someone to actually come out and say, “The Holocaust never happened” or “It happened and the Jews deserved it”, disgusting as it is, requires a certain amount of balls. However by using insinuations and inference to distance the viewers from what’s actually going on in addition to concealing uncomfortable facts from them– that’s something a whole lot worse.

That way of speaking enables you to make accusations without actually taking responsibility for them. Sadly this is very common in the Arab world. It makes learning the language very frustrating because you end up having to extract the meanings from very indirect speech and extended flowery metaphors.

However there are some courageous, straight talking people out there: journalists such as Future TV’s Sahar Al-Khatib, LBC’s May Chidiac, Al Arabiya’s Giselle Khorie, An-Nahar’s Samiir Kassir, and An-Nahar’s Gibran Tueni.

They confront issues head on, refusing to cop out. Which is why two of them are dead and one has had most of the left side of her body blown off. In the Arab world courage is the most noble of all the virtues. They all embody it.

Milham Raya, and many others like him, betray it.

Time and time again, especially when watching Al Jazeera or listening to politicians rambling on, hiding behind clichés, metaphors and platitudes while I’m trying to make some sort of sense out of it, I’m reminded of Saudi anthropologist Sa’ad As-Sowayan’s words:

“Critical philosophical thought hardly exists, and is almost completely forbidden. You are not meant to think, but to memorize and repeat by rote.”

He was talking about educational institutes but this also applies across the board, covering religion, politics and a huge section of the mass media.