MEMRI has posted a translation of parts of interviews that Bashar Al-Assad (aka the Giraffe) gave to both Al Jazeera and Dubai Television.

Of course what doesn’t need to be said is that MEMRI’s translations are brilliant; in fact anyone with any appreciation of Arabic knows that these guys are the Zinedine Zidane of translators.

Me? I’m a bit more like Dean Windass. Functional, not pretty and very little in the way of flair and grace.

When the Giraffe was asked (very gently) about human rights violations and the severity with which Syria treats its citizens, he responded:

“We released most of the people who participated in the incidents in the ‘80s. Some of them took part in terrorist activities. Thousands were freed from prison…”

Interviewer: “Many were freed, and others replaced them…”

Bashar Al-Assad: “No, only several dozen or even less…”

Interviewer: “Can we expect them to be freed as well?”

Bashar Al-Assad: “Let’s see why they were put in jail. People go to prison for breaking the law, and not for opposing or criticizing the Syrian government. There is no such law, and it is not done in practice. We in Syria have stringent laws – it is forbidden to talk about sectarianism, or about anything that threatens national unity, pan-Arab affairs, and so on. It is forbidden to have ties with foreigners who operate directly against the country. Syrian law is clear on these things. The law is stringent, in order to preserve national unity, and we implement the law stringently.”

And then there’s a bit at the end of the interview, which isn’t included in this clip but it’s really worth drawing attention to. (For any Arabic speakers, the full interview is here. ):

“We don’t claim distinction [i.e. privilege] and we don’t say that we have achieved democracy. But we’re realists and we are making forward steps. It’s not correct that we stopped at a [certain] place. And it’s not correct that we’re going backwards. We’re progressing but this is a long journey and we’re still at the beginning, we must not say that we haven’t progressed but we must not claim that we’ve got close to our goal. We’re realists…

“We don’t throw people in prison for their views. We have lots of Syrians and you are able to come to Damascus whenever you want and listen to views that are hostile to the country. And those who do that are not put in prison. This issue [imprisoning people] has nothing to do with people’s opinions. But is connected to laws essential for the National Unity. As for [someone’s] viewpoint, no one is held accountable on it. And you can go to Damascus and speak freely with people.”

No you can’t. Trust me, I tried. For a whole year I tried. My neck still hurts from all that looking over my shoulder.

Now all of what he says is, of course, lies.

First, when he says “preserving national unity”, he means preserving this. 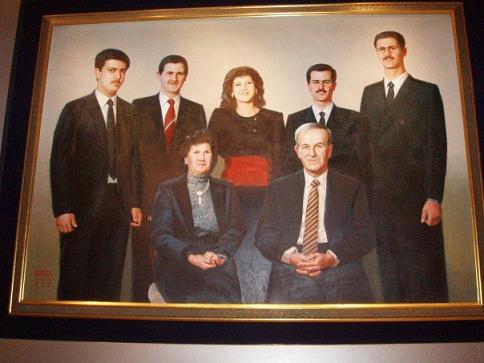 Then he makes this bizarre-o claim that people aren’t imprisoned for criticizing the government but only for breaking the law.

Yet Article 278 of the Syrian Penal Code specifically states: “[T]aking action or making a written statement or speech which could endanger the State or harm its relationship with a foreign country, or expose [the State] to the risk of hostile action against the State or its property,” will land you in prison before you can even finish the first part of “With our souls, our blood, we sacrifice ourselves for you oh Assad”!

Read for yourselves. If that’s not throwing people in prison for criticizing the government then somebody please tell me what is.

Finally, the claim that Syria under Ba’athist rule is making forward steps towards reform is the biggest lie of all.

Syria under Bashar Al-Assad is regressing. Sure, things initially improved when he replaced his father, but since then everything’s been put into reverse.

When I was there last year this process was beginning with the banning of the liberal Arabic newspaper Ash-Sharq Al-Awsat. Then they banned the website. Next came the crackdown on opposition groups.

That’s been followed by the monitoring of internet users, blocking of yet more sites and imprisoning bloggers. Now they’ve banned the newspaper Al Hayat.

And I’ve just been informed that internet café owners have been ordered to install CCTV at the entrances of their premises so that the authorities can monitor internet users.

The thing with dictatorships is that it’s not just the large-scale, dramatic evil– such as Halabja, Hama and Darfur– which is the problem. Dictatorships also have a banal side. This involves a gradual drip, drip effect that over a long period drains people of their basic humanity and infantilizes them.

I got an email from a friend in Syria who has a chance to further his education abroad. He was asked which university would he like to study at. Simple request, you’d think.

Yet for a quarter of a century the Ba’athists have denied or severely restricted his (and everyone’s) choices in pretty much everything. As I wrote in one of my Syrian journals, dictatorships get you to internalize them and do their job for them.

So when an opportunity came for him to freely decide his future he was overwhelmed. He was anxious and didn’t know what to do. He couldn’t handle it and felt ashamed of himself and very angry.

Or maybe they know it’s a far safer career move to keep quiet about this sort of thing and just carry on playing the “blame Israel” game.