I was going to respond in the thread about the Southall Black Sisters yesterday, but thought this issue worthy of its own post. In the comments, Andy Newman of Socialist Unity said:

It is for this reason that banging their own drum about the funding of religious charities is self-defeating. Especially as religious charities do a lot of the heavy lifting now – for example church going Anglicans are much more likely to help with charity work than the general population.

Now, this is a complete myth. The National Council for Voluntary Organisations conducted a detailed survey of secular- and faith-based work within the charity sector and addressed this very issue last year.

One paper in particular tackled this question head on, and found that the evidence inconclusive (see pp 29-33). The complications that often lead to an intuitive sense that religious people are more likely to be charitable arise, I think, from these observations:

The weight of the volunteering activity we found was on the everyday, routine activities within the faith community, many of which were more a spontaneous ‘way of life’ than an organised service. Also, we could not clarify the blurring of sacred and secular aspects of service: is the person who cleans the premises more a ‘volunteer’ than a person who takes a role in the ceremony of worship? Future research will need to plan for the problems of recording and analysing informal and spontaneous activities – what people ‘just do’.

Faith does not appear to be a motivating factor in the same way that – simplistically – wages might be regarded as a motivating factor for paid workers. The research evidence suggests complex interconnections between faith as an element in someone’s predisposition to volunteer, and their situation in a faith-based community, where their volunteering is triggered. It also suggests that a major aspect of faith-based volunteering is the social connection between volunteer and recipient. It may be useful to regard faith-based volunteers largely as people in committed networks with close – but little understood – connections between the helper, the helped and the act of helping.

This would suggest that in terms of providing wider dispersed social services, faith-based groups are not up to the task  for the simple reason that an obvious intra-communal generosity has been misdiagnosed by the secular eye as a faith-based propensity for charity. This point makes sense when one considers the fact that much faith-based charitable ‘outreach’ comes with strings attached and is motivated not by a sense of charitable mission, but as a vehicle for proselytising. Some Christian groups running homeless shelters for example reportedly expect participation in acts of worship in return. The Salvation Army, for example, threatened to close down its soup kitchens rather than comply with equality legislation and has famously turned away homeless people who are gay. Some Christian charities delivering HIV/AIDS services in Africa may actually be counter-productive in placing religious doctrine over scientific evidence in disease prevention.

This is backed up by data from the 2001 Census.

The 2001 Citizenship Survey finds that the proportion of people who volunteered and had a religious affiliation is similar to the proportion of people who had no religious affiliation, and this is true of both informal and formal volunteering. The Table below shows “Participating in informal and formal volunteering at least once a year (%)” 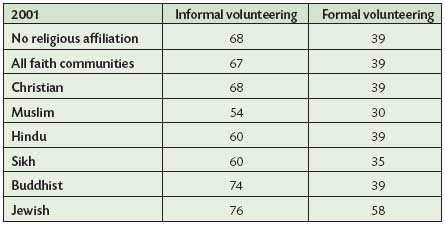 So there we have it. This is not to dispute that in many cases, a person’s faith might lead them to doing voluntary community work. Of course that is the case. But is not an indicative trend. Indeed, the case of the wino-vicar posted by David T earlier is a graphic demonstration that “church going Anglicans are much more likely to help with charity work than the general population” is just an urban myth.