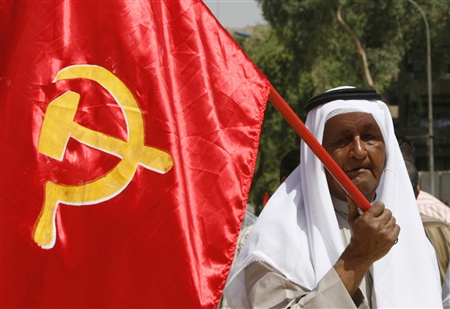 Yes, I know there are many other things to say about it– I’ve said some of them myself.

But consider what would have happened to anyone who dared publicly to display a Communist flag in Baghdad during Saddam Hussein’s regime– when, as Harry Barnes noted, the Iraqi Communist party was forced into hiding and “[m]asses of its activists and supporters were arrested, imprisoned, tortured and executed.” Is there a bit of irony in the fact that this scene was made possible by George W. Bush?

Update: Harry Barnes notes in the comments that the Iraqi Communist party “have essentially been advocates of what the comrades at one time termed ‘bourgeois democracy’ and have essentially pursued left-democratic socialist ends.” Harry provides a link to other photos from the ICP’s May Day demonstration.