Here is a work of art which you won’t be able to see at Tate Modern: 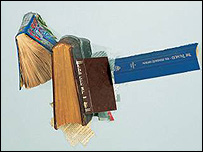 The artist is John Latham. The work is entitled “God Is Great”. It features the Koran, the Bible and the Talmud. These books have been cut apart. This is what Hooper says about it:

“It shows that all religious teaching comes from the same source, whatever name you give to it”

This is what Tate Modern says about it:

Having sought wide-ranging advice, Tate feels that to exhibit the work in London in the current sensitive climate, post 7 July, would not be appropriate… The interpretation of the work is not being questioned here, it is the act of cutting the books which causes us concern in light of the particular environment post 7 July.

This is what Sir Iqbal Sacranie says about it, according to the BBC website:

“We would have preferred to have been consulted by Tate Britain before the decision was taken to remove John Latham’s piece…Sometimes presumptions are incorrectly made about what is unacceptable to Muslims and this can be counter-productive.”

This is what Sir Iqbal Sacranie says about it, according to the Guardian:

‘I’m not aware of this particular exhibition, nor I am aware of any Muslim group that has protested….However, if the art gallery itself felt the display of the divine and holy books in such a manner would be deeply offensive to the believers of the three religions and therefore withdrew it, then I respect their decision.’

What is the strangest thing about this story? The removal of the exhibit by Tate Britain? Sacranie’s griping about the failure to consult him? His equivocal, empty observations? Or the fact that both the Guardian and the BBC immediately turned to him for a comment?