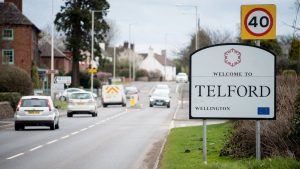 The dramatic news that Telford, a mediocre ‘new town’ in the east Midlands of England, was an even more gross centre of child sex trafficking and exploitation than former historic cotton mill towns sited in the north west came as a great shock . Initially ignored by the BBC, an organisation with its own issues to face over the infamous serial paedophile Jimmy Savile , the story as it unfolded followed a pattern remarkably similar to the earlier scandals: Female children as young as 12 years of age ‘groomed’ – that is enticed and cajoled into taking drugs and alcohol through befriending and gifts – then brutalised with threats and violence into prostitution.

‘Recruited’ by their pimps, most frequently from fast food shops run by Pakistani and Bangladeshis, the children were either transferred between venues by taxis or put within vehicles to be raped and/or perform sex acts on men from those same communities and those alone; the presence of a single Sikh in the north west and white women in the north east,  has allowed the fanciful caveat ‘mostly’ to be employed in press and television reports. Subsequent to these cases of mass commercial scale sex trafficking of female children being made public, an alternative narrative has been developed to dilute the salient facts, suggesting non-whites and male children were also trafficked to men from other ethnic groups. How successful this deflection has been is moot. Sanitised press reports of trials of the culprits offer scant proof to support these claims. Paedophilia among men of many races is not the issue; the scale and scope of a commercially driven enterprise conducted by one ethnic group alone is.

‘Lessons have been learned’

A report on the Telford¹ scandal has been produced. It focuses on the ‘failings’ of the police and social services of the local authority; it offers to go further into the background of these events, that may or may not come to pass. If there were any denials of knowledge about the grooming gangs at the time, these have withered in the face of much evidence to the contrary. The question asked at Rochdale, Rotherham, Telford and elsewhere – because the geographic spread of cases coming into public knowledge is wider than once thought : what is being done about this? We, the public, were reassured with a now familiar mantra ‘lessons have been learned’ and just as now dismissed by a public deeply angered by councils’ and police failure to provide accessible information.

One of the leading excuses for the astonishing decisions to brush evidence aside and mute police enquiries – if not reverse such enquiries against complainants – is that concern for  ‘community cohesion’ over matches these appalling crimes. The result, I would argue, is that any slight cohesion that existed across community boundaries, even in theory, is stone dead today. Justice delayed is justice denied.

Nothing less than a Royal Commission on the large scale organised child sexual exploitation scandal, with evidence taken under oath, will do. Even after all the recent revelations there is unease that we do not know the half of it.

When I researched this topic I had to scale back my projected article. There seems to have been an embarrassment surrounding child sexual abuse last century; such cases as reached the courts were never fully reported in the media by a sort of  ‘gentleman’s agreement’. There was also the fear of a far right movement revival, however far fetched, that would compromise the U.K.’s image already damaged by policing communal violence in Northern Ireland. One domestic civil impasse was one too many. Arriving at the same place from an entirely different direction were the 60s generation’s civil rights activist left formed around opposition to Powellism, the perceived racial views of Enoch Powell M.P. in speeches Powell made in 1968 on the topic of immigration, despite Powell never wanting or attempting to lead a mass movement in his own name. These left wingers were keen to build relationships with immigrant communities and were largely successful in doing so. This gave access to the concept of cultural sensitivity, a practiced understanding of different cultural norms (‘arranged marriage’ or customary dress codes).

Yet what these scandals have exposed was the utter indifference the authorities displayed to the white working class female children in the face of evidence. It is one of the most difficult to contemplate aspects of this enduring scandal. These children were written off. Cultural sensitivities weren’t that sensitive when it came to white children in deprived areas.

Other tangential problems were industrial decline and de-skilling, community displacement and the fact that new immigrants are still almost always dumped in such places that never had at anytime the material or social capital to offer support. Soon districts became strangers one to the other. In other ways, immigrants from very orthodox religious societies came to live in a country undergoing one of the most sweeping cultural transformations in its modern history – the Permissive Society of the last half of the last century. There was never going to be a good outcome.

¹The video contains material that might cause distress in some viewers.