A recent Council of Europe’s campaign to promote diversity and end discrimination has backfired on itself. A series of posters and tweets celebrating the hijab were withdrawn after a strong outcry, particularly from France.

The campaign was the product of two online workshops held in September  in collaboration with Femyso, a forum of Muslim youth organisations across Europe.

Hande Taner, the president of Femyso, defended the campaign in an interview with the BBC.

She said “the campaign itself is still on” but added: “As for why the tweet was deleted, I can’t speak on behalf of the Council of Europe.”

Ms Taner said it was “really sad that the efforts of minority youth are being attacked and undermined” by politicians. The BBc conveniently provided comments from far right figures like Marine Le Pen and Eric Zemmour. However the  opposition has come from across the political spectrum with several governmental figures speaking out.

Sarah El Hairy, the Minister of State for Youth and Engagement attached to the Ministry of National Education, Youth and Sport, said the campaign by the council’s Inclusion and Anti-Discrimination Division shocked her.

The campaign is against the values of France, El Hairy claimed.

“Wearing a headscarf is encouraged in the campaign’s video. We condemn this. France conveyed its disapproval of this campaign [to the Council of Europe] and the campaign was cancelled.” 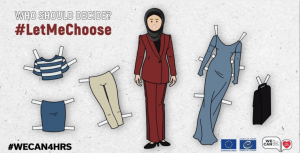 Critics of the campaign noted the insidious irony of posters such as in the one above. All the items of clothing seemed optional except one, the headscarf, which could not be removed.

Some of the other wording in the posters could have come from directly from Islamic fundamentalists : Beauty is in diversity as freedom is in the hijab.

There is no freedom to discard the hijab in many places around the globe. Women in Iran have been jailed , with one being sentenced to 24 years of  imprisonment, for removing the hijab.