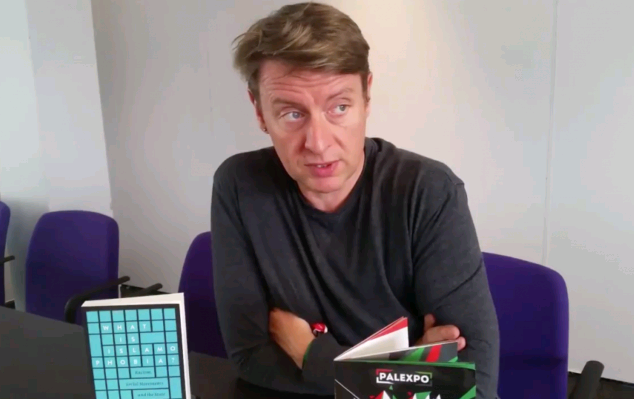 Professor David Miller is no stranger to Harry’s Place. In a students only meeting organised by the Palestinian student group Olive he made the following comments (recording of the whole event is here):

“One of the things we’ve come up against is that when we trace back the funding of some of these neo conservative think tanks in this country, Policy Exchange, Henry Jackson Society and others we found that many of them are funded by foundations that are run by people who also are engaged in funding activities beyond the green line in the occupied territories and so what we’ve noticed is that there’s a connection between people who fund the occupation and people who fund essentially hatred against Muslims.”

Then there was this:

The Jewish Agency, the Jewish National Fund and Keren haYesod all of which are engaged in supporting the occupation either directly or indirectly and not all of their work is done in the territories some of it is in Israel proper. So we find that a lot of the organisations in this country or in the US that are funding those three elements of the occupation are also engaged in funding neo conservative and Islamophobic organisations including two, including the EDL and Tommy Robinson, the Middle East Forum has been funding Tommy Robinson’s legal fees, the funding for the Middle East Forum comes largely from conservative pro-Israel sources.  And so you have this huge funnel of money going into both the occupation and the encouragement of Islamophobia in this country in the US and in other places too.

According to Miller the Jewish charity Keren Kayemet Hayesod is connected to Tommy Robinson and the EDL. Exactly how remains unclear. But wait, there’s more, the Israelis are even behind the Pittsburgh shooting…kind of:

The Pittsburgh case might be the best way to put it. The idea, the conspiracy theory that the Muslims are taking over that there’s an attempt to Islamise the UK, Germany, France the US and that that Islamisation, creeping Sharia as they call it, is something which should be opposed, which is an indication of that Muslims will never believe in our values and all that kind of crap but it also underlies astonishingly really much of the rise of the new antisemitism. So the Pittsburgh killer killed the Jews because they were encouraging the Islamisation of America and the Hungarian antisemities, they’ve got the same analysis; the Jews, the Jewish conspiracy, is encouraging the Islamisation of Europe. Isn’t it extraordinary you should go and have a look at that, I’ve never written that yet but it’s a new thing I’m just about to go into this, but that’s an indication of some of the ideas that underline this so you have the curious situation where people who are extremely pro-Israel, pro settlement, pro occupation are actually also funding organisations that are in some ways antisemitic. It’s…we see Netanyahu and Victor Orban, that’s an actual thing.

But there’s more, surely Israel must be involved in antisemitism in the Labour Party:

“I want to go on from that to talk about how this relates to what we’ve seen in this country in the last two years which is the attack in particular on the Corbyn leadership of the Labour Party, and the weapon of choice has been antisemitism. Now how does that relate to us and what we’re talking about? Well it relates in the sense that much of the attempt to paint the Labour party and especially Corbyn’s supporters of the party as antisemitic has been pushed by pro-Israel groups in this country sometimes funded in this country but sometimes also as we know from the al Jazeera documentary funded directly by Israelis from the million pound slush fund that they brag about. I think you can see that in the last 2 or 3 years. These new groups, these new hardline pro-Israel groups who have sprung up who are critical of the Board of Deputies for example North West Friends of Israel, Sussex Friends of Israel or kind of people who are active online who try to suggest that the labour party is more antisemitic than anything ever in the history of the universe which is clearly impossible. Let’s be clear there is antisemitism in the labour party there are people who are actual antisemites very, very few of them, a much larger number of people who occasionally say things that might be seen to be potentially antisemitic by accident but..I admit that’s true but by and large most of the allegations of antisemitism in the labour party have been false.”

And the weapon of choice has been antisemitism and one of the key ways through which it’s been implemented is the IHRA definition of antisemitism which actually as you’ll hear, as you know is a fairly short definition with examples which although the press didn’t report this very much the Conservative party hasn’t adopted. And of course what’s happened in relation to this is that the Labour Party has been effectively bounced into a position where they’ve had to accept all the illustrative examples as well as a definition of antisemitism proposed by the IHRA which in itself was a politically motivated attempt to pushback pro-Palestinian activism. Let’s be clear about that, that’s what it’s for, so far it’s done that very well it’s led to all sorts of splits within the pro-Corbyn wing of the party so now there are some elements of Corbyn’s supporters who now accept that there is widespread antisemitism within the party and it’s also meant that Israel’s attempts to drive a wedge into the Corbyn movement have been partially successful.

The Jewish Chronicle wrote of the meeting:

Prof Miller went on to say, in response to a question about Jewish students feeling unsafe on campus, that “it’s absurd if Jews genuinely feel unsafe as a result of Palestinian rights, well then you’ve got to ask questions about who they are and what they’re talking about.

He went on to say that “these are not students who are spontaneously threatened”, alleging that “it’s propaganda which they have been schooled with… there are organisations Israel lobby organisations Zionist movement organisations, some allied to the Israeli government, who have devoted huge amounts of time to do messaging to working out how to combat, in particular, BDS.”

What is Miller, author of such game changing works as :‘the alleged chemical attack in Douma on 7 April 2018, and other alleged chlorine attacks in Syria since 2014’ where he strongly implies poison gas attacks on civilians never happened:

“In a widely-publicized incident in Sarmin on 16 March 2015, the deaths of a family of six were allegedly caused by a chlorine barrel bomb. For this incident the alleged munition is implausible, the alleged mode of delivery is improbable, and the images of the child victims in hospital are consistent with drug overdose rather than chlorine exposure as the cause of death.”

even doing at Bristol in the first place? Thanks to Miller that prestigious university now soils itself with links to the pro-Assad conspiracy group the so called  Working Group on Syria, Propaganda and the Media. The Times exposed them a while back saying:

Another SPM academic, Tara McCormack, a lecturer in international relations at Leicester University, has tweeted that it is “an established fact that a) the White Helmets are basically Al [Qaeda]”. Dr McCormack has also argued that the death of the former Yugoslav president Slobodan Milosevic while being prosecuted for war crimes in the Hague “brought an end to the farce” of his trial.

The first briefing note published by SPM, titled “Doubts about ‘Novichoks’ ”, questioned whether Russia’s secret nerve agent programme ever existed. Britain has blamed Moscow for the poisoning of the former double agent Sergei Skripal and his daughter, Yulia, in Salisbury last month.

I suppose if we asked Miller he’d say it was “parts of the Zionist lobby” that got him the job there, it’s his answer to every other question after all.