Azad Ali has spotted a big problem in British mosques – there are not enough prayers (“dua”) and words of praise for “the mujahideen”. This is a terrible violation of the most sacred. The government has “scared the heaven out of the Muslims!”

See for yourself. Here is MEND’s “Head of Community Development & Engagement“ – Ali’s title – on video at a rally last month organised by Cage, the notorious terrorist support group.

Ali then goes on to praise Cage for its “noble stand” and laments the lack of backing for such a wonderful group.

Which jihadis might Azad Ali support? We know from his own words and also the certainty of a court case. Ali foolishly sued the Daily Mail and lost badly back in 2010:

In his ruling today, Mr Justice Eady said: “I would hold that [Ali] was indeed, in November 2008 and for so long as the blog remained available, taking the position that the killing of American and British troops in Iraq (whether before or after the 2005 elections) would be justified.

There’s plenty more on Ali, of course, as readers of this blog know. Most notably in this context, Ali once said he loved al-Qaeda preacher and recruiter Anwar al-Awlaki, who he found “endearing”. He has also hailed Ismail Haniyeh of Hamas for being a “motivational leader” and indeed the best candidate for Caliph of the Muslims.

Ali’s fellow speakers at the Cage rally are typical of the group and MEND’s world. They included Haitham al-Haddad, arguably the worst hate preacher in the whole country; Uthman Lateef, who is an open enemy of the counter-terrorist police officers trying to keep us safe; and Shakeel Begg, whose Islam is all about helping terrorists.

Now you might think that Azad Ali and MEND would be beyond the pale in these times, especially after the Paris atrocities.

You would be very wrong. Here they are welcomed to Parliament just days after the Paris attacks. 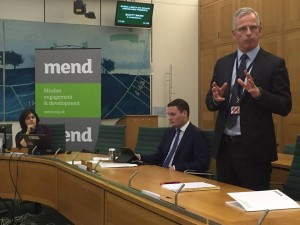 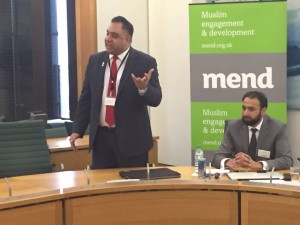 By the way, Wes Streeting has said that ”antisemitism has no place in our politics or our community”. Well, perhaps he could ask Sufyan Ismail, the head of MEND (right in the second picture above) what exactly he means when he enthuses about “battering the 300 year-old Israeli lobby”. Was Queen Anne turned by Mossad? I’d love to know!

For good measure, Streeting could ask Ismail why he is so fond of brazen and dangerous lies about politicians and hatred.

This political support for extremists really has to stop. MEND is nothing but an Islamist agitation outfit and it is very closely aligned to Cage. It is part of the problem, and proudly so. Enough already.