Remember the “terror babies” hysteria of a few years ago?

It was propounded by some on the extreme Republican Right, including the especially loony Texas Congressman Louie Gohmert.

According to this theory, pregnant women were coming to the US as tourists, having babies, and then returning with their newborns to their home countries, where they were raised to become terrorists. Because of a clause in the 14th Amendment to the Constitution, originally enacted after the Civil War to give former slaves citizenship, anyone born in the US, regardless of the parents’ status, is recognized as a US citizen. So after decades of indoctrination, these “terror babies” would return to the US as full citizens to carry out their nefarious deeds.

The good news is that we don’t hear much of the “terror babies” nonsense anymore. The bad news is that instead we are hearing about the danger of “anchor babies.”

It’s a sign of Donald Trump’s continuing domination of the debate among Republican candidates for president in 2016 that “anchor babies” is now an acceptable term of alarm among many Republicans.

The term anchor babies refers to the idea that children born in the United States to non-citizen parents are automatically citizens. Users of the term and critics of birthright citizenship allege that the child is an anchor baby because they can sponsor their parents for citizenship, though law prevents them from doing so until they turn 21. Term users also say the government is more lenient on undocumented immigrants with citizen children, though experts say that’s debatable.

The two top candidates in Republican primary polls, …Trump and former Florida Gov. Jeb Bush, both defended using the term this week under questioning from reporters.

Bush grew testy with a reporter on Thursday, who asked if he regretted using the term in a radio interview.

Other Republican candidates have jumped on the anti-birthright bandwagon to one extent on another. (An honorable exception is usually wrongheaded Florida Sen. Marco Rubio.)

Trump and others on the Right insist that the children of people in the US illegally are not entitled to birthright citizenship under the 14th Amendment, although Section 1 of the amendment is pretty unequivocal:

In other words, if Republicans want to do away with birthright citizenship, they will need to change or repeal the 14th Amendment (one of the greatest Republican achievements in American history)– which isn’t going to happen. At least Texas Sen. Ted Cruz, who supports the idea, acknowledges that it would be necessary.

Although the number of persons in the US illegally, especially Mexicans, has actually decreased since 2007, the hysteria continues.

Anyone familiar with American history knows that a similar hysteria surrounded the arrival of millions of immigrants from eastern and southern Europe around the turn of the 20th century– although most of them entered the US legally. 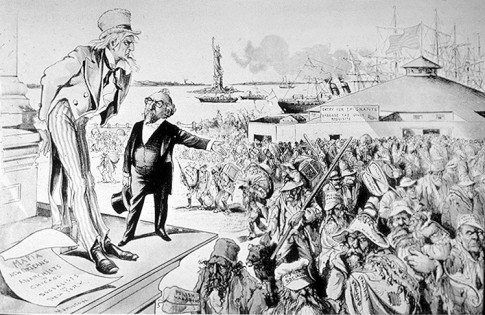 Among the immigrants that many “native” Americans considered undesirable were my father’s parents, who immigrated from Belarus to the US in early 20th century without knowing a word of English. Thanks to the 14th Amendment, my father became an American citizen before they did, and he would have been an American citizen even if his parents had never obtained US citizenship. So I have a particular fondness for that particular part of the Constitution, and will oppose any effort to reinterpret or change it.

Update: Speaking of Ted Cruz, I’m not sure how he identified me as a “Fellow Conservative,” but he emailed me this generous offer: 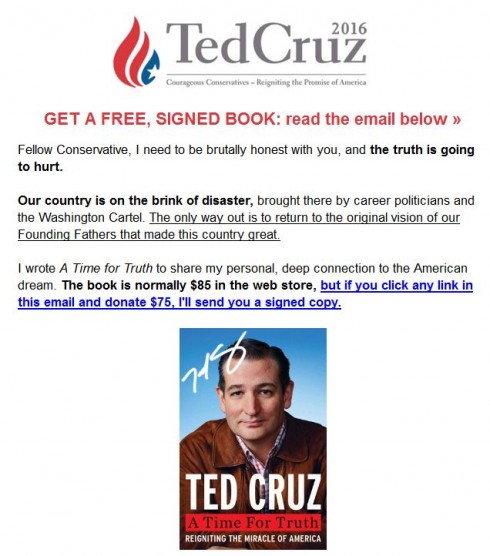