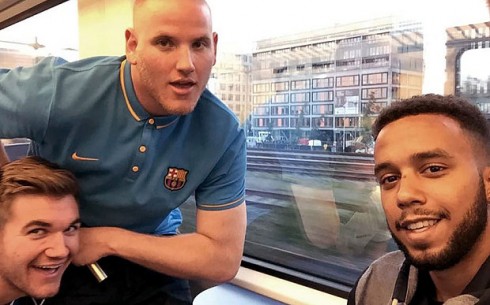 Well done to the three Americans (from left) National Guardsman Alek Skarlatos, Air Force serviceman Spencer Stone and Sacramento State University student Anthony Sadler who, along with British IT consultant Chris Norman and others, subdued an Islamist terrorist on a train between Amsterdam and Paris and prevented a mass murder.

The suspect had a box cutter or some other bladed weapon, authorities said.

“My friend Alek (Skarlatos) yells, ‘Get him,’ so my friend Spencer (Stone) immediately gets up to charge the guy, followed by Alek, then myself,” Anthony Sadler said in an interview with CNN.

“The three of us beat up the guy,” Anthony said. “In the process Spencer gets slashed multiple times by the box cutter, and Alek takes the AK away.

“I begin to tie him up with help from Chris, another passenger. I notice a man had his throat cut at which Spencer begins to apply pressure to the neck wound before he bled out.”

Spencer was cut in the head and neck and almost had his thumb cut off, Alek’s brother, Peter Skarlatos told CNN. Alek had taken control of the rifle and hit the suspect in the head with the muzzle, the brother said.

The Washington Post reports that Skarlatos, Stone and Sadler are friends from middle school. Stone remained hospitalized on Saturday, though his wounds are reportedly not life-threatening.