I held off on the whole #Mossadstolemyshoe story – a strong contender for the funniest Twitter meme ever – because I thought Asghar Bukhari must be ill.

But now he is spinning such responses – incredulity and speculation about his state of mind – in order to spread his deluded and conspiratorial narrative still further.

If you aren’t yet up to speed with his original claims – and the fun people had with them – I suggest you read the coverage here or here – and, for some further background on the man, John Sargeant’s account here.

(Briefly, he published a Facebook post in which he insisted that Zionists had somehow got into his house (though there were no signs of a break in) and stolen one of his shoes.)

Bukhari’s latest move has been to release a YouTube video in which he distorts the inevitably incredulous responses in order to whip up a paranoid mindset amongst young Muslims – he makes it very clear that it is this group which he is addressing.

One of his techniques is to imply that Zionists were troubled and angered by his Facebook post.  This isn’t true – In fact everyone enjoyed the joke – the Zionist Federation’s response was particularly funny. 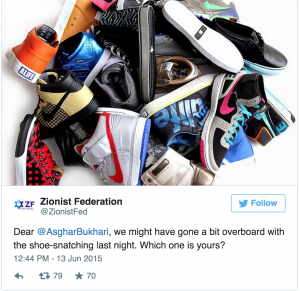 And he uses some bizarre logic – asking why people are incredulous that Zionists would steal his shoe when they steal land and houses.

His conspiratorial mindset is reflected in the way he seems to assume, not just that Mossad or whoever broke into his house, but that all ‘Zionists’ are somehow in on the plot.  This tweet to John Sargeant made me laugh

but it’s quite worrying that he is trying to spread such ideas among his followers, many of whom are clearly buying into these delusions.

From 6:00 onwards in his latest YouTube video he tries to persuade people that responses to his post prove that he is right; the mockery, the accusations that he is lying, the speculations about his mental health – all are simply part of a cunningly laid plan of deflection contrived by Zionists worried that they have been rumbled.  At about 8:00 he suggests that if the police don’t act on such claims, that is yet more evidence of a conspiracy.

He manages to get in some of his usual nasty digs at ‘Uncle Toms’ (Maajid Nawaz and Adil Ray on this occasion), before claiming, in more sinister vein (about 10:15) that in fact all his critics have some connection with Israel.

After 12:00 he whips up his audience further by claiming that Israelis steal organs from children, and then blames Muslim leaders and organisations for (perfectly sensibly) ignoring him.  He exhorts young Muslims to reject these ‘old leaders’, Muslim groups and mosques – and organise.

This disdain for many in the Muslim community is nothing new.

And the final bizarre scene of the YouTube video, featuring his young child, raises further questions.