Geoff Lee of the Palestine Solidarity Committee explains it all to you at the Stopper website: 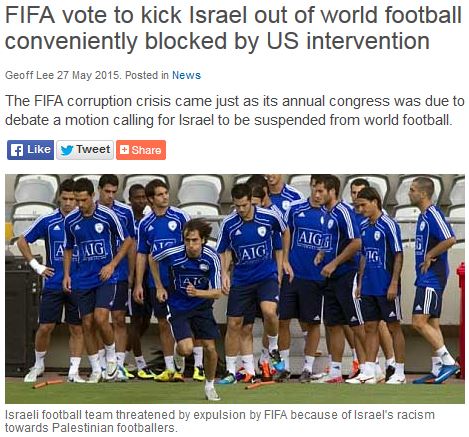 Displaying a remarkable non-understanding of international law, Lee writes that the US government “ordered” the Swiss authorities to arrest and extradite six FIFA officials to block the organization from expelling Israel from world football competition.

Never mind corruption, exploitation of foreign workers and stuff like that. It was all about the power of Israel over the US administration. (Well, at least it’s a change from the “Obama is throwing Israel under the bus” meme at the other extreme.)

It turns out there’s a history here:

Jack Warner — the former president of CONCACAF, the continental confederation under FIFA headquartered in the United States — is among those charged with racketeering and bribery.

Update: In case anyone is wondering, the original post at the Stopper website has been revised twice since I posted this.