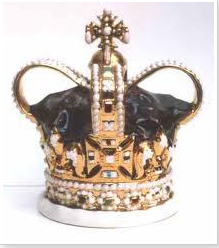 Do you know how government in the UK is constituted and where it gets its powers from? If you don’t and you are not one of the estimated 20% of Anglicans (2009 British Social Attitudes study) in the UK, you may want to prepare yourself for a shock…..

We live in a secular democracy in the UK, don’t we? Well, technically we live in a hereditary, constitutional monarchy. This is, simplistically, how it works: 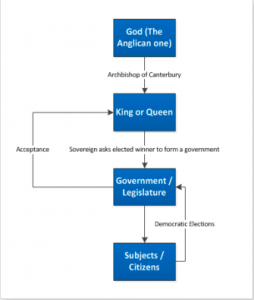 As it’s a hereditary monarchy, God has not only anointed the current sovereign, but also has promised to anoint their first born children. In 2013, the Succession to the Crown Act ensured gender equality by granting succession to the first born children, rather than first born son. God was obviously OK with that as it received Royal Assent. However, the same act didn’t repeal the exclusion of Roman Catholics in the lines of succession. God has seen the light with regards to sexism, but His religious bigotry remains.

The reason for this becomes obvious when you know what monarchs must swear to, before God, during their coronation ceremonies:

Not a lot of wiggle room there for a Roman Catholic! (Let alone persons of other religions, or none)

So the Queen, as the Supreme Governor of the Church of England, swears before God (and everyone watching on TV) that ‘All this I promise to do.’ Is this problematic?

I think so. I presume the Queen is indeed a true believer. She must believe she has been chosen by God to uphold these oaths. Either that, or she’s willing to lie about the promises and just pretend, which doesn’t seem likely. She also approves laws in the UK. What if she had to give assent to a law which disestablished the church (of which she’s head) in the UK. This would be a dilemma for the Queen. She would have two choices:

Of course the real issue here is that we can’t have sensible debate about the merits or otherwise of this disestablishment given the unwillingness of any Prime Minister to put the Queen in this situation. 27 Anglican bishops in the House of Lords also makes this possibility less likely.

So, true Secularism in our democracy (rather than favouring the 20% of Anglicans in the UK) is not possible without this constitutional reform.

Now, dyed-in-the-wool Republican that I am, even I quite like the Queen. We don’t know what goes on in her weekly discussions with the various Prime Ministers she’s seen in her 63 year tenure, but I’d guess she sits and listens, maybe imparts some of her significant experience, and then lets the commoners get on with it. She’s been pretty adept at walking the fine line of her constitutional responsibilities and staying politically neutral. I’d still like to see a reform, but I can wait until her reign is over. She’s about the best this archaic process has to offer.

But the Queen is 88 years old. There will come a time when the next in line will ascend to the throne. King Charles III.

Prince Charles has been waiting a long time for his reign. At a time when most of us are retiring, he’ll be given the only significant job of his life. And this is a man with opinions. Opinions that he’s been sharing with government ministers in private correspondence for the last 40+ years.

Charles has shared his views (and expected to be listened to) on the following topics:

Basically, all the things that interest him. There has been push back on this interference with Freedom of Information (FOI) claims put in by various journalists. Government has reacted to this by amending the FOI Act itself to protect the heir to the throne. Hardly, transparent.

The Prince’s friend and broadcaster Jonathan Dimbleby said that efforts are ongoing to redefine the monarch’s role ready for Charles’ accession “…to speak out on matters of national and international importance in ways that at the moment would be unthinkable”. Does that scare you? It should.

Charles is not an academic man. The reason he thinks he should be listened to is that he believes he has been chosen by God. If I thought this, I too would believe everyone should listen to my views. Charles must grow to understand that he can either express his opinion as commoners do (and become a commoner in the process), or be a constitutional monarch and stay quiet and neutral. He can’t do both.

I don’t think he will understand this and, counter-intuitively, this could be the best thing Secularists could wish for. People simply won’t put up with royal interference after having the Queen playing with a very straight bat for so long. It could be the first pebbles at the top of the rock slide of eventual constitutional reform.

So bring on Charles, and let the divinely anointed idiocy commence……..

This piece was inspired by a much better one by Nick Cohen, here.