My first sight of the pro-Israel rally organised by Sussex Friends of Israel on Sunday was quite impressive: Israeli flags as far as the eye could see.  For a moment I wondered whether the antisemites are right and Victoria Park represents just the tip of a giant Zionist conspiracy that controls the whole of Brighton. But then I remembered Caroline Lucas and my excitement subsided. 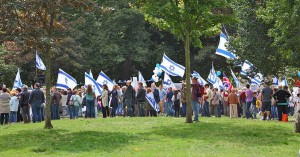 My mood was further sobered by the sight of the small but dignified counter demonstration by what I suppose we are entitled to infer to be the Sussex Enemies of Israel. Please note the presence of the Palestinian flag bearer, whom we shall meet again in a contrasting setting. 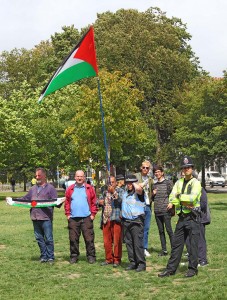 Reflecting on the apparently unbridgeable gulf separating the two sides in the Israel/Palestine conflict, I was delighted to see a sign that I thought almost everybody in both lands could unite under. 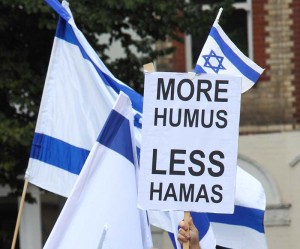 But, not surprisingly, not all the signs were likely to elicit unanimous support from both contingents present. For instance, the next two images sum up the divergence of views on the subject of that dreaded ideology: Zionism. 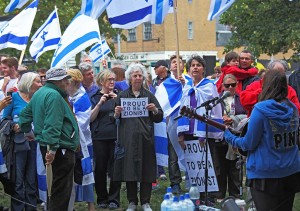 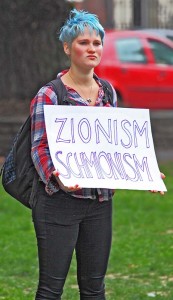 On a more positive note, here is a participant demonstrating her united loyalties. 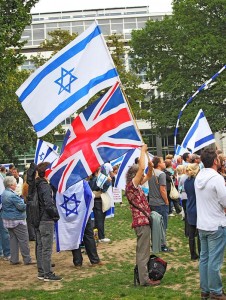 The following scene had me waiting expectantly for Ben-Gurion to appear in the top window to announce to the assembled company that “The State of Israel is established!” But it was not to be. Perhaps I had missed the crucial moment. 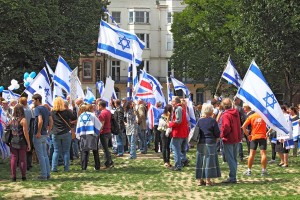 Speaking of the birth of Israel, is this stately lady about to lay a bouquet of flowers at a monument for the unknown soldiers who died in the War of Independence? 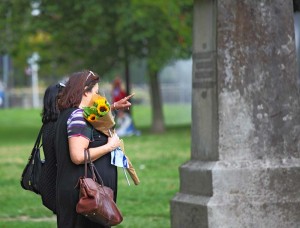 We come now to a somewhat discordant note, I regret to say. You remember the Palestinian flag bearer who feature early on in our narrative? Well here is his reaction to the playing of an Israeli song from the podium. 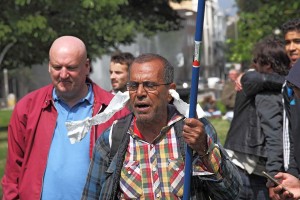 This next chap probably couldn’t hear the music, but I rather doubt he would have objected to it. 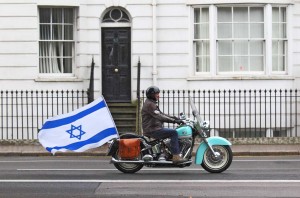 Please remember in years to come where you first read about the following Harry’s Place exclusive disclosure: Here we have proof positive that backchannel negotiations were taking place between Israel and the Palestinians in the unlikely setting of Victoria Park in Brighton. I bet Caroline Lucas will be pleased about that! 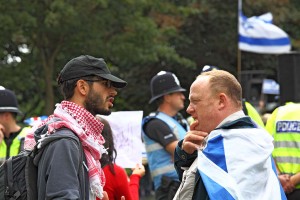 Last, but by no means least, thanks to a Mossad-grade investigation by your plainclothes photographer it can be revealed that the personage featured earlier with the bouquet of flowers was no stately lady! Indeed I wish to offer my unreserved apology for that demeaning remark to Julie Burchill. 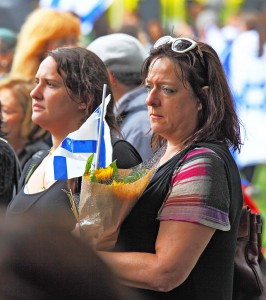