Islamists can certainly be slick when it comes to propaganda. Salma Yaqoob is busily promoting a public meeting tonight in the second city entitled “Putting Birmingham School Kids First”. Two issues of the many which emerge from this. Firstly consider the remarkable picture used to advertise this event – a dozen or so mixed race school children in a circle, with boys and girls holding hands. As might be expected with children so young, there is not a hijab to be seen. The kids appear to be wearing sports kit, and if so, are taking part in mixed games. 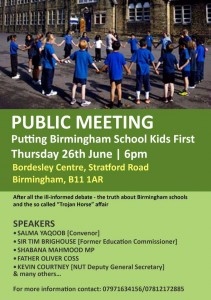 That should be unremarkable. Except this is Birmingham, and the above image is being used by one of the Park View school’s staunchest defenders. Whilst the image used is uncontroversial to most, is that the vision Salma Yaqoob has for schooling in her city? Is that the vision of the Muslim Council of Britain or the Association of Muslim Schools? It hardly seems to be an image Islamic educationalist Tahir Alam and his colleagues have been working towards.

The second oddity with regards to this meeting is the presence of the National Union of Teachers. Concerns raised by teachers have featured in many of the revelations in Birmingham this year – it is after all educational professionals who are placed between the rock of government requirements and the hard place of determined Islamist lobbyists. Yet the NUT response to OFSTED’s critical report, was deeply conservative – its leader Christine Blower lazily playing the race card rather than looking critically at the substantive challenges some stripes of British Islam present to both education and the rights of her members. One might have expected a trades union to be concerned about staff being forced from their jobs, but not in the brave new world of Ms Blower.  When OFSTED commented on the monitoring of staff email by an outside agency employed by one school under investigation – the NUT appeared unconcerned. So one question for panelist NUT Deputy
General Secretary Kevin Courtney – are you representing your members in Birmingham, or are you representing the Association of Muslim Schools?

For all the Benetton style imagery of happy multi-culturalism and children’s play evoked by this meeting, its participants – and in particular Yaqoob and Courtney -need to be reminded of an important point. You will be judged on what you do, not on the imagery you present. You cannot run with the fox, and hunt with the hounds.

Paul Stott is an academic based at the University of East Anglia.