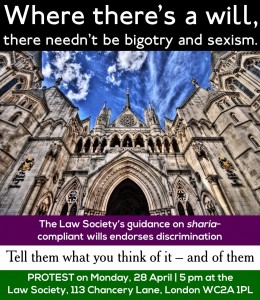 In the last weeks many women’s rights and secularist campaigners up and down the country have been rubbing their eyes incredulously in a state of déjà-vu. After having fought off the threat of the official legitimation (yet not the practice) of gender segregation in universities, another representative body has taken it onto themselves to publish guidance that by all means and standards can fairly be described as discriminatory. This time it is the Law Society, the representative body for solicitors in the UK, who has issued a practice note for drawing up sharia-compliant wills, specifying that women would receive half of the share of men, while non-Muslims and ‘adopted and illegitimate children’ would inherit nothing at all.

In the ensuing debate, we have seen exaggerated headlines and a barrage of apologists who quickly came to the defense of the Law Society, dismissing any critique as ‘Islamophobic’ and ‘another sharia scare story’. Yet, several important questions remain unanswered. The first is why the Law Society would issue any kind of guidance on religious matters, as pointed out by the Lawyers’ Secular Society’s Charlie Klendjian and Sadikur Rahman.

The answer to this can be found at the very end of the practice note in the ‘further information’ section, where the Law Society references its sources. There, you will find links to such website as the Islam Channel, which has been fined repeatedly by Ofcom for breaking the broadcasting code for airing programmes that advocate marital rape and call for the killing of those who ‘insult the prophet’. Ofcom specifically stated the Islam Channel’s programme “was likely to encourage or incite the commission of crime”.

Of course, the matter of Islamic inheritance is complex, and it would not be fair to suggest that practice note is solely based on one website. Yet, the Law Society is clear about the intellectual basis of its guidance. One of its main references is a book on Islamic inheritance rules by Dr. Muhammad al-Jibaly, a hardline salafi and former President of the notorious Qur’an and Sunnah Society of North America. If you are in any doubt where the pathological hatred of women that is so central to the Law Society’s practice note stems from, you should read Dr. Al-Jibaly, whose views are as clear as they are extreme: “A willful fornicator deserves to be whipped one hundred lashes, and a willful adulterer deserves stoning to death.” Unsurprisingly, his opinion is not limited to the crime of ‘fornication’, but finds reflection in his work on inheritance, where he specifies his stance not only non-Muslims and ‘illegitimate children’ (“children of zina”), but also on “slave women”. Now, if you think that Al-Jibaly restricts his expertise to the interpretation of Islamic law, you should listen to his advice on children and non-Muslims, the latter of which he simply refers to derogatorily as kuffar.

“What is sad to see, for many parents they send their children to the kuffar school, they allow them to mix with the kuffar, play with them […] so that the lifestyle and the beliefs of the kuffar become deep-rooted in the hearts of the kids. […] Command your children to pray when they are seven years old and hit them if they do not pray, or they don’t pray right. […] A girl she should start hijab from the age of seven. By the age of ten it becomes an obligation on us to force her to wear hijab. And if she doesn’t wear hijab we hit her.” [Parents should encourage] their children from mixing with the Muslims, staying away from the kuffar, having only Muslims as his friends, feeling the uniqueness and the pride of being Muslim  […]”.

Despite being a representative body bound by its own Equality Policy, the Law Society has chosen not to base its practice note on the work of those many British Muslims who are struggling to reconcile their faith with considerations of equality and human rights. Instead, the Law Society has opted for ignoring progressive voices within British Islam, and enshrined the ideology of a man who so clearly loathes women, non-Muslims and children as a model to emulate.

And this is merely the beginning. The Law Society has already announced a “planned future seminar series on Islamic law [with] expert and authoritative speakers highlighting some basic concepts and requirements of the Islamic Shari’a”. It remains to be seen whether it will be left to men of the ilk of al-Jibaly to run these sessions.

Clearly, the Law Society deems itself beyond criticism. It comes to no surprise that human rights campaigners are in strong opposition and have set up a petition, which has already received more than 2,000 signatures, and organised a protest at the offices of the Law Society to take place next Monday April 28th.

Wherever there is a will, there need not be bigotry. If you think the Law Society should base its advice on considerations of equality and human rights, rather than peddling to the bigotries of the likes of al-Jibaly, you should come and make sure they can hear this message loud and clear.