The New York Times has picked up on the brouhaha over recent remarks by London Mayor Boris Johnson which had even Deputy Prime Minister Nick Clegg calling him a “careless elitist.”

Mr. Johnson is no scientist, but he has stepped into the kind of debate over the relationship of I.Q. to race and poverty that has tripped up many others before him. He was defending the record of [former prime minister Margaret] Thatcher and her belief in hard work and meritocratic reward, and he urged both helping the poor and giving more support to the brightest. But as he did so, he appeared to mock the 16 percent “of our species” who have an I.Q. below 85 and urged that more help be given to the 2 percent who have an I.Q. of 130 or above.

He said that inequality was inevitable and essential to spur envy and ambition, and hailed greed as a critical spark for economic activity, even as he said he hoped that the financial boom of London would not produce the cruelty of the past.

“I also hope that there is no return to that spirit of Loadsamoney heartlessness — figuratively riffling bank notes under the noses of the homeless,” he said. At the same time, he spoke about growing inequality as a danger to civic peace and made an analogy comparing people to cornflakes in a cereal box that, when shaken hard produced some cornflakes that rose to the top.

“For one reason or another — boardroom greed or, as I am assured, the natural and God-given talent of boardroom inhabitants — the income gap between the top cornflakes and the bottom cornflakes is getting wider than ever,” he said, adding, “We cannot ignore this change in relative economic standing, and the resentment it sometimes brings.”

He argued that a new generation of “Gordon Gekkos” – a reference to the character in the film Wall Street whose mantra was “greed is good” – should do more to help the wider population but that their greed was a “valid motivator”.
…..
“I stress, I don’t believe that economic equality is possible; indeed, some measure of inequality is essential for the spirit of envy and keeping up with the Joneses that is, like greed, a valuable spur to economic activity.”

Of course nobody outside of a handful of utopians believes that complete economic equality is possible, or even desirable. But the gap between the rich and everyone else has grown so wide in recent decades that even Tories and Republicans ought to have enough sense to see the urgency of narrowing it to some degree rather than celebrating the forces that have widened it.

I can’t decide which type of conservative is worse: proud elitists like Boris Johnson, or fake populists of the Sarah Palin variety. Both types are stupid, destructive, and nightmarish, but in different ways. In America, of course, we’ve tended to be plagued with the Palin types. But Boris Johnson is a salient reminder that the other type haunts us as well, and is equally malevolent.

Here I want to rise to the partial defense of Sarah Palin, whose willingness to take on big oil companies as governor of Alaska gives her some genuine populist credibility. There are plenty of other Republicans who are more accurately described as fake populists.

However as Geier notes in another post, unconcealed snobbish disdain of the working class may be making a comeback among American conservatives. She refers to a book by conservative author Charlotte Hays called When Did White Trash Become the New Normal? A Southern Lady Asks the Impertinent Question, which has received favorable mentions in such leading publications of the Right as The Weekly Standard (for which Hays writes), The National Review and The Washington Times.

Writing at The Nation about Hays’s book, Michelle Goldberg observes:

A chapter on the foreclosure crisis and crushing student debt, for example, is called “White Trash Money Management.” “There are, I thus adduce, two keys to not being White Trash: having a job and paying your bills on time,” Hays sniffs. “The first is getting more difficult in this economy, but it is still White Trash to go on disability if you aren’t positively unable to lift a finger.”

Hays’s work is saturated with that particular kind of right-wing smugness born of the conviction that one’s willingness to express common prejudices is a sign of free-thinking audacity. What’s interesting is where it’s directed—not at liberals or their sacred cows, but at fat, broke, ordinary Americans. “We look like hell as a nation, and fat people bear a large brunt of responsibility for this,” she writes. “I can remember when going to New York meant seeing beautiful, pencil-thin people in stylish clothes on Fifth Avenue. Where are they now? The other day I saw a fat guy in polyester in my favorite New York restaurant.” Heaven forfend! She’s so delighted with her description of diabetes as “the talismanic White Trash disease” that she uses it twice.

…Hays’s flip dehumanization of struggling people does have a serious purpose. It’s becoming increasingly hard to ignore inequality’s ravages or to blame them on gay marriage or snotty university professors. Conservatives find themselves faced with a choice: either acknowledge that our economic system is failing the American people, or deride the American people for failing our economic system.

Hays opts for the latter.

The cover of Hays’s book features what she might call a talismanic symbol of white trashiness: a trailer home with the Christmas lights permanently up. 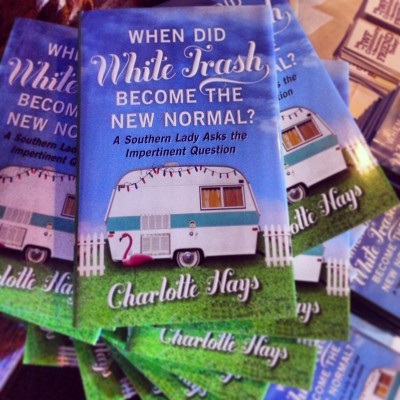 By contrast Gretchen Wilson in her classic song “Redneck Woman”– which struck a chord among many white working-class females– celebrates that very thing:

When it comes to a choice between between Charlotte Hays and Gretchen Wilson, I don’t need to ask whose side I’m on.

Of course Republicans now depend on persuading large numbers of working-class whites that the GOP, rather than out-of-touch, freedom-threatening Democrats, have their true interests at heart. So it’s unlikely they will drop their phony populism any time soon. But it’s good to see some honesty finally seeping out.