A sample monthly budget brought to you by the fine corporate folks at McDonald’s and Visa has been widely and justly ridiculed. 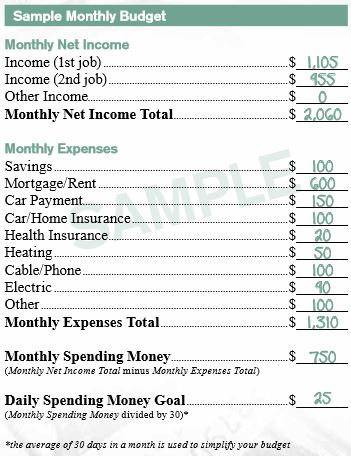 McDonald’s told ThinkProgress that “The samples that are on this site are generic examples and are intended to help provide a general outline of what an individual budget may look like.” Which is, I’m sure, why the income from the first job just happens to be right around what you’d take home working close to full-time at McDonald’s wages. And also why, after ThinkProgress and others called them out on it, the budget actually changed, from showing $0 allocated for heat to showing $50 for heat.

Note how important that second job is, though. There’s absolutely no way that you could make this budget work, even by the comically unrealistic standards set here by McDonald’s and Visa, without it, and it’s obvious McDonald’s knows that. Even with two jobs on the budget sheet, the $20 health insurance isn’t the only eyebrow-raiser. Take the $600 a month budgeted for rent. The national average fair market rent for a two-bedroom apartment is $949

I’m not sure where you can get health insurance for $20 a month. But aside from that, I suppose that in some cheaper parts of the country, if you share an apartment, have no dependents and no unexpected expenses, you might make this work.

But the catch is the second job. Even if you’re willing to work two low-paying jobs, your first job may not allow for it.

For job-seekers, it’s now harder to find and keep multiple part-time jobs. “Among low-wage employers — retail, hospitality, food service — employers are requiring their employees to say they’re available for a full-time schedule, even when they know they’re never going to schedule them for full-time,” says Stephanie Luce at the City University of New York’s Murphy Institute.

Luce is a labor sociologist who studies union movements around the
world. She co-authored, with the Retail Action Network, a study based on surveys of retail workers in New York, Discounted Jobs: How Retailers Sell Workers Short. “Managers are asked to schedule based on customer-flow, on weather, on trends in the economy, and to change the schedule day-to-day,” says Luce. “They don’t want employees that are going to say ‘I can’t come in, I have another job.’ They want employees that’ll say, ‘OK, I’ll come in if you need me. I won’t come in if you don’t need me.’”

You don’t have to go further than the nearest fast-food joint to see
this trend. Devonte Yates is 21, and works at a McDonald’s in Milwaukee. He lives with his mother and little sister. Yates is getting an associate’s degree in criminal justice, so he’s paying tuition, a cell phone bill, plus rent to his mother and helping with the groceries. He’s paid minimum wage: $7.25 per hour. Yates’s bus ride to work takes 90 minutes, and costs him $4.50 round trip.

“The schedule comes out Fridays,” says Yates. “However, it is subject to change — at least that’s what’s written at the bottom of the schedule. Sometimes you can work a 1 p.m. to 9 p.m., and then the very next day have to be back at 6 in the morning. They schedule you so randomly that it’s pretty much impossible to find another job.”

Yates says he worked two jobs previously — at Walmart and at a local
company that provides phone-captioning services to the deaf. Those employers, he says, allowed him to work consistent, non-overlapping schedules. But Yates says the 24-hour McDonald’s where he works expects employees to offer ‘open availability’ or basically, to be on-call all the time. Sometimes, it’s  for a two-hour shift; sometimes, an eight-hour shift.

So McDonald’s is essentially telling its lowest-paid workers they need a second job to get by while frequently making it impossible for them to hold one.

As for the sample budget, I’m reminded of what A.J. Liebling wrote in 1947, a time of high food prices, about some New York City newspapers printing daily menus for “low-to-moderate income” families that “offer a diet that suggests the regimen of a well-conducted poorhouse”

Liebling quoted the English journalist William Cobbett, writing in 1823 of a recent depression:

The fashion became to cry up spare diet, and to preach content with hunger. One of the Tracts put forth by canting hypocrites who pretended to exclusive grace was entitled “The Life of Peter Kennedy, who lived on, and saved money out of eighteen pence a week.” And this to his praise, mind! . . . The gist of the whole of the “Tracts” was to inculcate content in a state of misery! to teach people to starve without making a noise! What did all this show? Why, a consciousness on the part of the rich, that the poor had not fair play; and that the former wished to obtain security against the latter by coaxing.

I can say with some assurance that whoever came up with that McDonald’s-Visa budget earns substantially more than $2,060 a month.

For many low-income workers, an increase in the minimum wage could make a budget like that slightly more realistic. But due to Republican opposition, efforts to increase it have gone nowhere in Congress– despite overwhelming public support among Democrats, Independents and Republicans.