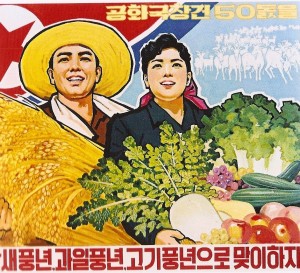 Unsurprisingly, Pyongyang has referred to upcoming trilateral naval drills between the US, Japan and RoK as “a clamor for the invasion of the North that makes the situation worse”; although how much worse than the droughts (which, this year, are causing water shortages instead of floods) this could be for those North Koreans born into all but the highest sub-divisions of the Core songbun/caste this could be is another matter.

The propensity for the Chosun of Peace to resort to violent histrionics, however, is not a matter for levity, as seen with the unprovoked shelling of the civilian island of Yeon Pyeong-do in November 2010. One of a clutch of islands which straddled the 1953 Armistice Line, it long had been in the sights of the Korean People’s Army which, like a badly trained guard dog, was unwilling to keep on its side of the fence (or thought its side of the fence extended much further out into the Yellow Sea); and only a chance arrival of a passenger ferry at the other side of the island as well as a local festival which drew people to a food market prevented a much higher death toll.

This had occurred soon after biscuit-snarfler, Kim Jong-eun had been appointed Great Successor to the [now] Eternal Leader and, as with the earlier take-your-son-to-work event which was the sinking of the RoK Navy corvette Cheonan, the assumption is that lessons in crisis management were being arranged.

(I would prefer that doting fathers taught their sons how to catch fish or kick a ball, but that is just me.)

After Appa achieved apotheosis in December 2011, Kim Jong-eun sought to put his own mark on the State organs by appointing nuclear and missile chiefs in April of this year. They were to oversee missile tests regardless of the effects this could and did have on famine (sic) relief programmes.

If Appa were looking down on his son – instead of being stoned to never-ending death by his adoring subjects – he would have been highly disappointed as, not only did this test end in failure, but his son admitted as such. And went on to confirm there would be no nuclear test this year.

Instead, expect further cajoling for food supplies as the wrong Songbuns starve whilst the biscuit tins remain full.