As tweeted before rigor mortis set in: 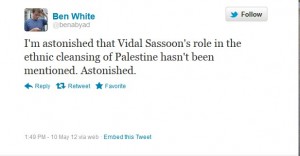 Except the Guardian has done just that.

All the same, White’s definition of himself and how he relates to the world has reached such a point that he must do something to redress the positive press being given to a disobedient Jew. Especially now he is dead and will not run comb-teeth under his nose.

Hat-tip: Judy in the comments.