Nick Cohen has an excellent new book out – You Can’t Read This Book – which we have outrageously failed to promote in the way we ought to have. 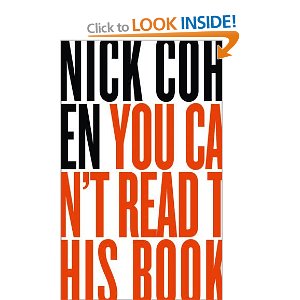 What can I say? I know the book is superb, as Nick Cohen books always are. I also know that I will agree with (pretty much) everything he has to say. However, instead of reading it over Christmas, as I should have, I instead embarked on an odyssey through the Sherlock Holmes novels and stories, from which I have only just emerged. I finished the re-reading – for the first time since childhood – last night, with The Casebook of Sherlock Holmes: the rather downbeat set of twelve stories, including one which involves a “negro” who is portrayed in a rather unpleasant way, and another which involves a debtor who is “in the hands of the Jews”.

My failure to have read Nick’s book is no reason for you to think you can get away without buying and reading it. So buy it now.

If you need a taster, Kindle probably lets you download a chapter for free. Or you can read an extract here. Perhaps Nick will let us publish some more of it. Perhaps he will let us have a pre-legalled version, with all the really defamatory stuff still in.

There have been a large number of excellent and positive reviews. Julie Burchill is on good form, when she says…

Nick Cohen’s books are like the best Smiths songs; however depressing the content, the execution is so shimmering, so incandescent with indignation that the overall effect is transcendently uplifting. In 2007’s What’s Left, the last book which I felt compelled to order by the dozen and press upon whoever came to the door (a few Jehovah’s Witnesses went away with more than they bargained for) he examined the truly repulsive spectacle of “how the liberal left of the 20th century came to support the far right of the 21st.” That is, how the enemies of sexism, racism, homophobia and religious mania came to embrace all of those evils in their eagerness to suck up to the last beacon of anti-Americanism: political Islam.

Still, it wasn’t the first time that a strand of Islamism had found itself in bed with an unlikely playmate. In his new book You Can’t Read This Book: Censorship in an Age of Freedom (Fourth Estate)—which deals with the rise of self-appointed censors from jihadis to judges — Cohen reminds us that the apartheid regime in South Africa banned The Satanic Verses, and that Salman Rushdie had to pull out of a trip to Johannesburg to discuss the censorship of opponents of white rule because of death threats from South African Islamists.

Closer to home, Cohen tells the story of a band of Asian women who ran hostels for battered wives under the banner of Women Against Fundamentalism finding themselves in the middle of warring Nation Front thugs and religious maniacs. “The women never forgot the experience of seeing apparent enemies unite against them.”

In the unseemly struggle to stifle expression, an unholy smorgasbord of the silly and the sinister (to paraphrase the book’s dedicatee Christopher Hitchens) have linked arms to keep free speech at bay. While we congratulate ourselves on our unparalleled freedom to “be ourselves” we have in fact seen a greater curtailment of real freedom – to write a book, to name a name – than in any other time in recent history. Cohen traces the strange shift of fears in the newsrooms and publishing houses of the west. Modern writers in democratic countries, he argues, are not frightened of attacking politicians. The old deference has gone, and no editor stops journalists or comedians mocking their country’s leaders in the most vicious terms. But artists and reporters who boast of their willingness to “speak truth to power” quietly step back from offending religious fanatics who might kill them and, he adds, the super-rich, who might sue them.

Read the rest. And then, as I said, buy his book.