“[Billionaire] Warren Buffett pays a lower tax rate than his secretary — an outrage he has asked us to fix,” [President Obama] told a joint session of Congress [in September] when he revealed his American Jobs Act.

Here is how the President’s plan might work using Buffett as an example. A few years ago, Buffett said his secretary made $60,000 and paid 29 percent in taxes. The billionaire made $46 million but only paid 17 percent in taxes, about $8 million. Under the millionaire tax, if Buffett paid that middle class rate of 29 percent, he would owe another $5.5 million in taxes.
…..
Republicans, however, call it divisive.

And here are some other examples of class warfare in American history:

It is to be regretted that the rich and powerful too often bend the acts of government to their selfish purposes.

Distinctions in society will always exist under every just government. Equality of talents, of education, or of wealth can not be produced by human institutions. In the full enjoyment of the gifts of Heaven and the fruits of superior industry, economy, and virtue, every man is equally entitled to protection by law; but when the laws undertake to add to these natural and just advantages artificial distinctions, to grant titles, gratuities, and exclusive privileges, to make the rich richer and the potent more powerful, the humble members of society — the farmers, mechanics, and laborers — who have neither the time nor the means of securing like favors to themselves, have a right to complain of the injustice of their government.

Labor is prior to and independent of capital. Capital is only the fruit of labor, and could never have existed if labor had not first existed. Labor is the superior of capital, and deserves much the higher consideration.

It may well be that the determination of the government (in which, gentlemen, it will not waver) to punish certain malefactors of great wealth, has been responsible for something of the trouble; at least to the extent of having caused these men to combine to bring about as much financial stress as possible, in order to discredit the policy of the government and thereby secure a reversal of that policy, so that they may enjoy unmolested the fruits of their own evil-doing. . . . I regard this contest as one to determine who shall rule this free country—the people through their governmental agents, or a few ruthless and domineering men whose wealth makes them peculiarly formidable because they hide behind the breastworks of corporate organization.

The absence of effective state, and, especially, national, restraint upon unfair money getting has tended to create a small class of enormously wealthy and economically powerful men, whose chief object is to hold and increase their power. The prime need is to change the conditions which enable these men to accumulate power which it is not for the general welfare that they should hold or exercise.

For twelve years this Nation was afflicted with hear-nothing, see-nothing, do-nothing Government. The Nation looked to Government but the Government looked away. Nine mocking years with the golden calf and three long years of the scourge! Nine crazy years at the ticker and three long years in the breadlines! Nine mad years of mirage and three long years of despair! Powerful influences strive today to restore that kind of government with its doctrine that that Government is best which is most indifferent.
…..
We had to struggle with the old enemies of peace–business and financial monopoly, speculation, reckless banking, class antagonism, sectionalism, war profiteering.

Never before in all our history have these forces been so united against one candidate as they stand today. They are unanimous in their hate for me–and I welcome their hatred. 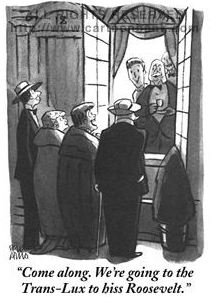 The Wall Street reactionaries are not satisfied with being rich. They want to increase their power and their privileges, regardless of what happens to the other fellow. They are gluttons of privilege.

These gluttons of privilege are now putting up fabulous sums of money to elect a Republican administration.

Why do you think they are doing that? For the love of the Republican candidate? Or do you think it is because they expect a Republican administration to carry out their will, as it did in the days of Harding, Coolidge, and Hoover?

I think we know the answer. I think we know that Wall Street expects its money this year to elect a Republican administration that will listen to the gluttons of privilege first, and to the people not at all.

Republican reactionaries want an administration that will assure privilege for big business, regardless of what may happen to the rest of the Nation.

Remember that the reactionary of today is a shrewd man. He is in many ways much shrewder than the reactionaries of the twenties. He is a man with a calculating machine where his heart ought to he. He has learned a great deal about how to get his way by observing demagogues and reactionaries in other countries. And now he has many able allies in the press and in the radio.

If you place the Government of this country under the control of those who hate labor, who can you blame if measures are thereafter adopted to destroy the powers, prestige, and earning power of labor?
…..
Today, too many Americans in dining cars, in country clubs, and fashionable resorts are repeating, like parrots, the phrase “labor must be kept in its place.” It is time that all Americans realized that the place of labor is side by side with the businessman and with the farmer, and not one degree lower.

Should any political party attempt to abolish social security, unemployment insurance, and eliminate labor laws and farm programs, you would not hear of that party again in our political history. There is a tiny splinter group, of course, that believes you can do these things. Among them are H. L. Hunt (you possibly know his background), a few other Texas oil millionaires, and an occasional politician or business man from other areas. Their number is negligible and they are stupid.

We’re going to close the unproductive tax loopholes that allow some of the truly wealthy to avoid paying their fair share. In theory, some of those loopholes were understandable, but in practice they sometimes made it possible for millionaires to pay nothing, while a bus driver was paying ten percent of his salary, and that’s crazy. […] Do you think the millionaire ought to pay more in taxes than the bus driver or less?