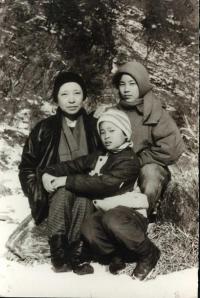 It has been some time since I last blogged about the Hermit Kingdom, and I am sorry to say that reports continue to confirm acts of soul-destroying cruelty.

Although John Reid has stated publically that he no longer believes in Father Christmas – or so he says – he would agree that he suffered no ill-effects from this foolish belief. By way of Mick Harltey, comes the distressing details of a less fortunate individual: Oh Kil-nam, a South Korean economist who defected to North Korea in 1985.

Oh had been studying for a PhD in West Germany and linked to anti-Seoul groups when he was approached by North Korean agents. As well as offering medical treatment for his wife, Shin Suk-ja who was suffering from hepatitis, he was promised a comfortable life in the North as befits loyal supporters of Juche.

Despite objections from the clearly more savvy Shin, he took her and his his young daughters (pictured above from the mid 80s) to the North. His realization at his mistake was immediate as the family was dispatched to the Kwan-li-so system [penal and political ‘re-education’ camp] to read the otiose and pseudo-religious burblings of Sunday School boy gone bad, Kim Sung-il. At one point, Oh was recording propaganda broadcasts to the South, and recounts meeting two flight attendants from the KAL YS-11 hijacking.

The family was offered a reprieve the next year when Oh was directed to return to West Germany and act as Pied Piper for other South Korean residents. Shin refused to co-operate, and instructed Oh to defect on arrival and that she would tell his daughters that he had died in a car accident.

After seeking asylum in Denmark, Oh attempted to locate his wife and daughters back in the North. For over 20 years, he had little access to resources or assistance, until the aforementioned Washington Post article. At this point, readers in Shin’s homecity of Tongyeong started a vocal campaign, including raising a seven figure sum and public vigils in Seoul for her and other kidnap victims in the North.

In Britain, this formed part of Early Day Motion 2079 by MP for Congleton, Fiona Bruce; although, with just 27 signatories, it is not as popular as some of Robert Halfon’s.

It now is reported that Shin and her daughters are alive and not-well in Kwan-li-so 15 aka Yodok Camp in South Hamgyong Province.