Writing at the wacko website The Truth Seeker, Gilad Atzmon not only takes his usual shots at Harry’s Place (“Islamophobic agent-provocateur”), he expands his attack to Andy Newman of Socialist Unity and Richard Seymour of Lenin’s Tomb, both anti-Zionists who have denounced his antisemitism.

He accuses Newman, Seymour and, um, David Aaronovitch of being “caught together naked holding ideological hands.” He bases this on a reading by Aaronovitch at the Oxford Literature Festival of antisemitic quotes from Atzmon’s writings– designed to call attention to the poisonous nature of Atzmon’s beliefs.

Atzmon posted this image depicting Seymour as some sort of recruiter for Israel: 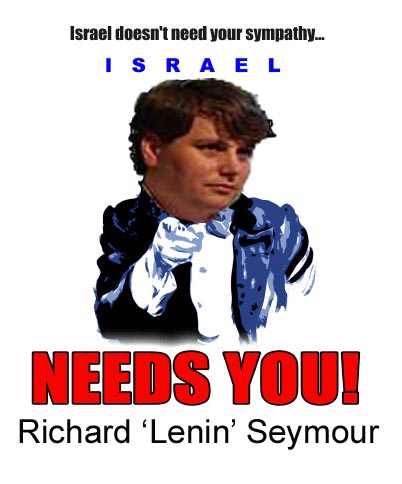 Well, Mr. Atzmon, let me vouch for Richard Seymour’s anti-Zionist credentials: I’ve been following his blog for years, and I can assure you that he hates Israel as much as anyone I’ve come across on the web.