As we’re discussing Gilad Atzmon today, why not take a peek at his website. You’ll find an interview with Eric Walberg. 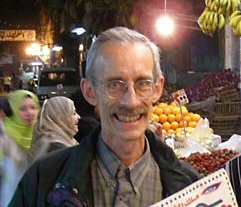 Walberg has also been a regular contributor to the deliberations of a notoriously anti-semitic thinktank known as the Adelaide Institute, whose leader, Frederich Töben, has done hate-speech jail time in Germany. Töben was one of the more prominent guests at Iranian president Mahmoud Ahmadinejad’s Holocaust-denial conference last December.

A survey of Walberg’s writings show that he regards Jews as having been the authors of their own misfortunes over the past 2,000 years, and all the great wars of the past century can be laid at the feet of shadowy Zionists – even the “still mysterious collapse” of the World Trade Center in New York on September 11. He has written approvingly of the contents of the Protocols of The Elders of Zion – that classic text of pathological Jew-hatred.

The interview is worth reading in full. However, Marxists – perhaps Nina Power, Richard Seymour, Owen Hatherley, and Laurie Penny, whose publisher will also be putting out Gilad Atzmon’s forthcoming book on Jews – will find this exchange particularly interesting:

GA:…I tend to distinguish between Marx and ‘Marxism’ (ideology/praxis); I have no problem with the former. The later [i.e. Marxism]  though, within the Western discourse at least, is a pretty problematic power structure with very little regard for ethical issues, humanity and humanism. To a certain extent, it is a form of supremacy that adopts the Judaic binary template; it replaces the notion of Kosher with ‘progressiveness’. Both Jews and Marxists define what chosen-ness is all about and then locate themselves comfortably amongst the chosen. This disturbing mode of behaviour explains why many western Marxists fail to grasp the power of Islam as the leading anti-imperial force.

EW: You are right about Marxism vs. Marx. Perhaps Marx operated according to some Jewish memes, despite his rejection of Judaism. You no doubt know that Marx ended up saying about what was being touted as his doctrine, “If that’s Marxism, I’m not a Marxist.”