Socialist Unity has used the recent atrocities in Norway as an excuse to haul out— again– an unsolicited and unwanted “endorsement” of Harry’s Place on an English Defence League message board.

Never mind our repeated denunciations of the EDL and its thuggery– according to SU, it goes to prove, well, something.

Normally I’d let this pass, except for a comment posted to SU in response by one “Tudeh Comrade.” Tudeh is the outlawed Communist party of Iran, which was part of the mass movement that overthrew the Shah in 1979 but which was soon brutally suppressed by the new Islamic Republic. In the years that followed, the regime imprisoned and murdered thousands of Tudeh activists.

I suspect which website you trust most depends on your tolerance of political Islam. Socialist Unity will often seek to understand or minimise acts of armed acts committed by Islamists. On the other hand Harry’s Place is very unforgiving of Islamism both as a political phenomenon and after it gains power (like in Iran).

I prefer HP’s approach, but then I remember the faces of my comrades as they came into work after the Islamic Republic hanged all the leading Iranian Marxists back in the 1980s.

It’s easy to make common cause with Islamists if they have yet to line the cranes up and dangle your comrades from them, but in my experience socialists and Islamists make extremely uneasy bedfellows. 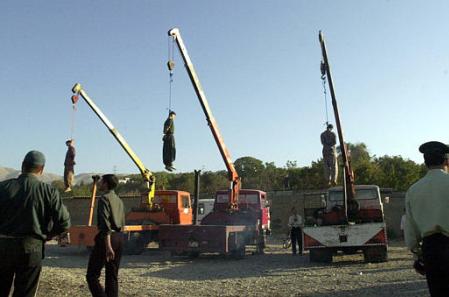 Of course Harry’s Place is no friend of Leninist communism, any more than it is a friend of Islamism or anti-Muslim bigotry. But I suppose when Tudeh Comrade sees appalling posts like this at Socialist Unity– praising one of the murderers of his or her comrades– he or she doesn’t have much trouble choosing between the two.